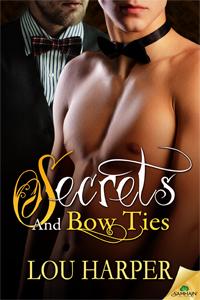 At a Glance: Secrets And Bow Ties is just not the usual fare I have come to expect from this talented author.

Self-confessed gold digger Dylan Price is cooling his heels as a waiter at a trendy West Hollywood restaurant, waiting for the sugar daddy of his dreams to walk through the doors. Someone rich, sophisticated. Preferably old.

Bookish Simon Wainwright couldn’t be further from Dylan’s ideal. Aside from his terrible fashion sense, Simon suffers from a glaring lack of a Beverly Hills mansion. And he’s barely over thirty!

Dylan, however, isn’t made of stone. Coincidence, an obscene candle, even Simon’s dorky cardigan compel him to give the shy academic a very special birthday gift, which Dylan files away as a one-night stand. But when Dylan’s quest lands him in hot water, he runs to Simon to hide.

The two take off for Las Vegas, where Dylan takes upon himself to give Simon a complete makeover. For reasons he can’t comprehend, Dylan begins to reevaluate his life—and what he holds most dear. But with danger not far behind, he might be too late.

Review: Secrets and Bow Ties, the third installment of author Lou Harper’s Secrets series, picks up with Dylan’s story. Dylan is Olly’s (of Secrets And Charms) roommate, along with Teag—a rather mysterious third who no doubt will be featured in the next Secrets book, if there is to be a fourth. Olly has just a small cameo, and the story remains focused on Dylan and, to a lesser extent, Teag.

Dylan desperately wants a sugar daddy, and has bounced from job to job and from relationship to relationship pursuing his impossible dream—to be cared for and pampered in a life of luxury. Interestingly, Dylan shies away from the idea of love when he fantasizes about this life he wants, and chooses not to look too closely at his own motivations or his future. When he hooks up with the wrong rich man, Dylan finds himself in deep water, and he turns to a one-night-stand for help.

Simon is a classic brainy nerd. Pursuing nanotechnology to treat cancer patients, he is kind, slightly naïve and painfully shy. When Dylan shows up at his door ,after leaving Simon on his birthday night, Simon allows him in, no questions asked. Thrown together, the two decide that friendship is best, and Dylan is not surprised as he has held the belief that Simon is too smart and too good for the likes of him. With the bad guys pursuing him, Dylan convinces Simon to go to Las Vegas for a quick trip. Once there, the two men find that friends-with-benefits is quite a nice thing indeed. While the storyline of this book had great potential, I found myself struggling with the level of naïveté on both characters’ parts. Dylan ran when he should have allowed the law to handle things, and Simon trusted with a blindness that perched on stupidity. Plus, the ever glowering and negative Teag was just so strange a foil to Dylan’s bounce and sass. I just couldn’t be sure if these two guys liked each other as friends do, or just endured one another in their lives. Teag’s love was a tough love for sure, with most of what he aimed at Dylan being a bit mean spirited and condemning.

I also didn’t see the evolution needed for Dylan to change his life trajectory based on some good sex and Simon allowing him to perform a makeover on him. There simply was not the strength of a solid storyline or characters that changed a great deal here that was so apparent in the previous two novels in this series. I felt the story lacked something and, in the end, I think it really was chemistry between Dylan and Simon that should have been so much stronger and maybe needed more plot line to develop.

Lou Harper is such a strong writer, and her characters are usually so well defined, but Secrets And Bow Ties is just not the usual fare I have come to expect from this talented author.

You can buy Secrets and Bow Ties here: