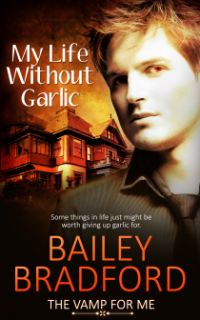 Title: My Life Without Garlic

At a Glance: A funny and cute take on the vampire mythos.

Blurb: Some things in life just might be worth giving up garlic for.

It was simple curiosity that led Augustin to the vampire dating site—he thought it must be a joke started up by a bunch of weirdos. Man, was he right—but it just so happens that those weirdos really are vampires, and when one shows up at his place, Augustin’s world is turned upside down.

First he’s got a psychotic vampire to deal with. Then he’s got one who is much more fun hanging around.

Except now that Augustin knows that vampires exist, he can’t be left alive. Or can he? When an alternative is offered up, Augustin doesn’t care for it, either. After all, he doesn’t want to be whisked off to some disgusting vampire den.

Tony’s the vampire next in line to lead the coven. He wants to be a fair man, and that means arguing against killing Augustin. If he’s also attracted to the sarcastic, adorable man, where’s the harm in that?

The attraction between Augustin and Tony is undeniable, but deny it is what they both try to do. Someone is going to have to bend or break.

Review: Bailey Bradford is an author I have read and enjoyed before, and the blurb for My Life Without Garlic just spoke to me. I am always looking for new takes on the paranormal genre, and this was a fun one. My Life Without Garlic is cute, funny, and an insta-love story that I really enjoyed. There was snark and bad vampire puns and jokes, some even told by the vampires themselves, which made this short story all the more enjoyable as the characters poked fun at both the genre and themselves.

I liked how Bradford used some of the vampire tropes: the allergy to sun, sleeping in a coffin (ventilated ’cause you’d suffocate otherwise LOL!), and turning into bats. She also had the vampires laugh off some of the other well known things that were offensive, such as garlic and holy water. Though, Augustin’s idea of this might have just been a bit skewed since he ‘blessed’ the water himself. It is often said belief is the strongest defense against such things, and it was fun to see the vampire he tried to use this against find it humorous. It made the vampires seem all the more ‘human’ to see that living eternally wasn’t all it was cracked up to be, but there were some good things.

I would have liked more on Bradford’s version of vampires, especially in one instance where Augustin is speaking with another vampire’s companion, and he warns him to make certain he is fully prepared to be happy with his mate, Tony. I liked Augustin’s moxie, even if it was defensive, and he did eventually admit his feelings for Tony. I also enjoyed the fact that Augustin wasn’t the perfect male form. He’s overweight and sensitive about it, but the thing I liked most was that Tony didn’t care one bit about that. Tony defended Augustin against a fellow vampire many times, often to the other character’s misfortune.

You can buy My Life Without Garlic here: