We’re so pleased to welcome author Annabelle Jacobs back today, with an excerpt from her new Dreamspinner title A Casual Thing. Enjoy this little tease from Patrick and Will’s story, then be sure to click on the Rafflecopter widget below for the chance to win an e-title from Annabelle’s backlist, winner’s choice.

I wanted to write a story that was funny, and sexy, but also with a touch of angst to bring about a happy ending, and A Casual Thing is the result. It’s the first contemporary novella I’ve written for Dreamspinner Press, and is a big change from my usual paranormal or fantasy stories, but was also a lot of fun to write.

I love writing about college-age boys because it takes me back to my own college days. I did an electronic engineering course, so naturally the majority of the people on it were boys, and Patrick reminds me of a lot of them! 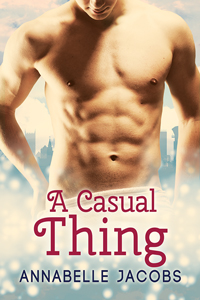 Blurb: Patrick Mason travels to Bristol to spend the summer with his brother, Ben. He’s cat sitting for the first two weeks while Ben goes on holiday. But Ben neglected to tell him he wouldn’t be doing it alone. Will Adams—Ben’s mate and Patrick’s long-time crush—is staying in Ben’s guest room while he waits to move into his new house after a breakup.

Against his better judgment, Patrick convinces Will that a little no-strings fun is just what they need. Patrick doesn’t want to get involved with a guy on the rebound, and Will isn’t interested in starting something serious with a student. But Patrick’s never been good at separating sex from feelings, and this time is no exception. As their weeks together draw to a close, they need to decide if they have something worth pursuing or if it’s really just a casual thing.

Excerpt: Patrick stopped, the words dying on his tongue as he noticed Ben wince.

Ben shrugged. “He needed somewhere to stay. I’d sort of forgotten you had the hots for him.”

“How could you forget?” Patrick paced in front of the bed. “The last time I was here, I tried to climb into his lap and told him how hot he was. In front of his boyfriend.”

“Oh yeah.” Ben grinned, and Patrick stopped his pacing to punch him on the arm.

“It was hilarious.” Ben ducked out of the way when Patrick tried to punch him again. “Look, you were drunk. We all were. He doesn’t hold it against you.”

“But he won’t have forgotten.” The whole thing still made Patrick cringe every time he thought about it. He may have been drunk, but sadly not drunk enough to wipe the horrifying experience from his brain.

“Sit down. I think you might be overreacting just a tad.” Ben even used his finger and thumb to demonstrate how much he thought Patrick was overreacting before grabbing Patrick’s arm and yanking him back down onto the bed.

Patrick sighed. Fine. Maybe he was being overly dramatic, but come on. This was Will. Tall, dark, and handsome, and as easygoing as Ben. He oozed charm and made you want to curl up with him somewhere warm and never ever move. Well, that last part could just be Patrick.

He was going to make such an arse of himself. He flopped onto the bed and covered his face. “I hate you. You are the worst brother ever.”

About the Author: Annabelle Jacobs lives in the South West of England with her three rowdy children, and two cats.

An avid reader of fantasy herself for many years, Annabelle now spends her days writing her own stories. They’re usually either fantasy or paranormal fiction, because she loves building worlds filled with magical creatures, and creating stories full of action and adventure. Her characters may have a tough time of it—fighting enemies and adversity—but they always find love in the end.

12 thoughts on “Excerpt and Giveaway: A Casual Thing by Annabelle Jacobs”