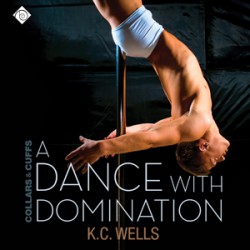 Title: A Dance with Domination (Collars and Cuffs: Book Four)

At a Glance: I really enjoyed the audio performance on this book. Nick J. Russo is very talented when it comes to making a separate voice for each character.

Blurb: Recently returned to the UK after living in the States since he was eleven, Andrew Barrett is determined to keep busy and make a new life for himself. He works full time as a copywriter and strips at a club on Canal Street on weekends. But it still leaves him too much time to think. Then he finds the BDSM club, Collars & Cuffs, where at twenty-nine, he is their youngest Dom. Young doesn’t mean inexperienced, however. All this activity keeps him focused with no time to dwell on the past. But the past has a way of intruding on the present.

It’s been four long years since Gareth Michaels last set foot inside Collars & Cuffs. But when he finally summons his courage and steps back into his former world, he finds the man who drove him away is still a member, and what’s more, he wants Gareth back. Two men in pain need the freedom they find in each other, but it takes another man’s horrific plans to make them see it.

Review: A Dance with Domination is definitely one of my favorites in the Collars and Cuffs series. Andrew works as a stripper, but he’s also a Dom and he ends up joining the Collars & Cuffs BDSM club. Since he suffers from losing someone he loved, he distances himself, avoiding intimate contact with subs in order to guard against the possibility of becoming attached. Andrew befriends a fellow stripper, Gareth, and later discovers that Gareth is a former sub at Collars & Cuffs. When Andrew realizes Gareth wants him, they hit it off, but their union is short lived. Jealousy and misunderstandings tear them apart, but when others get involved, they are able to sit down and resolve their differences. In addition to coming together as a couple, they’re able to share scenes at the club.

Andrew’s character was the thing I loved the most about this book. Andrew was introduced to the BDSM world at a young age, so though he is young, he has a lot of experience. Unlike the older alpha type Doms at Collars and Cuffs, Andrew is coveted for his beauty, grace, and skill as a Dom. I loved seeing Andrew in his role as a stripper. It was so exciting to see a tough Dom doing a lap dance for alpha type customers. The role reversal was quite sexy. At one point Andrew has to be saved from a drunk man who holds him down and attempts to assault him.

Narration: I really enjoyed the audio performance on this book. Nick J. Russo is very talented when it comes to making a separate voice for each character. The only thing that threw me off was that I didn’t like the breathy voice the reader gives Leo. It wasn’t how I imagined Leo to sound. However, since Leo only played a small roll in this book, it didn’t make much difference.

You can buy A Dance with Domination here: