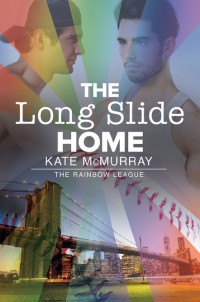 Baseball and the Rainbow League

I figure sports fandom is one of those things that knows no gender. At least not in my house growing up. My dad watches all of the sports. All of them. Even golf. And Sunday was for watching sports, so that’s what you’d find him doing. (True story: until he retired, pretty much the only things he ever read were trade publications related to his job and Sports Illustrated. Now that he has more leisure time, he seems to be in a phase where he reads rock star autobiographies, so he’s branching out, I guess?) Anyway, sports on everywhere. Even my mother watches football sometimes.

My formative moment happened at age twelve when my dad took me to my first Yankees game. I was hooked. We lost to the Orioles, too, I remember. I didn’t even care. And then, blah blah, I went to college in Massachusetts during the Yankees’ late-90s dynasty blah blah super fan blah blah wore Jeter jersey in the dorms just to antagonize people blah. Having to defend my team loyalty to the Boston fans I went to school with only made me a more devout New York fan, so you can imagine my delight when I moved to my first apartment in New York City and, on summer nights when a game was on TV and the Yankees made some truly remarkable plays? You could hear people in the buildings neighboring mine cheering. It was awesome.

I get that I don’t look like your typical sports fan. I like fashion and art and design, too. I’m not particularly athletic. I listen to opera for fun sometimes. I’m multifaceted, what can I say?

But this is old news. Let me tell you about two weird baseball-related things that happened this year.

First, I went to Flame Con in Brooklyn back in June. Flame Con is essentially an LGBT Comic Con, and it was held at Brooklyn’s legendary Grand Prospect Hall (you owe it to yourself to watch the commercial). Dreamspinner Press had a table there, but as I am not a writer of the sorts of sub-genres they were promoting (fantasy, sci fi, superheroes, etc.) I just went to the con as a spectator with a bunch of my friends. Who all cosplayed, by the way. I wore a dress with dinosaurs on it, because I like whimsy but full-on costumes make me uncomfortable. Anyway, my entourage members were all big comic book fans, so they were delighted to talk to some of the artists and get their pictures taken with other cosplayers. I, on the other hand, found a guy who draws a webcomic about a gay baseball league (sound familiar?!) and started chatting with him as my group moved through the ballroom of exhibitors. My friends left me behind. “Kate’s found her people,” somebody said.

So, leave it to me to find the one baseball fan in the sea of superhero comics, I guess.

The second thing that happened was a couple of weeks ago at a reader/author meet and greet. A young man walked up and started asking about my books. Trying to ascertain which of the books I had available I should give him, I asked, “Do you like baseball?” He looked at me blankly for a long moment and then said, “I’m gay,” as if that was an obvious answer to the question. When I clarified that, actually, I knew many a gay sports fan, he laughed and explained he just didn’t care for sports. So I gave him a different book.

I think I like reading about things about which I am nerdy as much as I like reading about completely unfamiliar things. I tried to strike the balance in the Rainbow League books so that people who aren’t into baseball could still find them accessible but the hard core baseball fans could find delightful things, too. There’s a sabermetrics joke in the first book that I think probably six people will get, but I’m fine with that as long as readers can still enjoy the stories and larger themes.

So I hope you check them out!

Blurb: Nate and Carlos have been the best of friends since their childhood playing baseball together in the Bronx. For the past few years, Nate’s been in love with Carlos, though he’s never acted on it and Carlos has never given any indication that he returns Nate’s feelings. Nate has finally given up, determined to move on and find someone else, especially now that Carlos has shacked up with his boyfriend, Aiden.

Carlos doesn’t understand why Nate has suddenly gotten weird, acting cold and distant at team practice for the Rainbow League. But if that’s how things are going to be, Carlos is done trying to figure Nate out. But then Aiden reveals he has a violent side, and Carlos needs his best friend’s support. On top of that, he starts to realize his feelings for Nate might not be limited to friendship. But in the aftermath of his relationship with Aiden, and with Nate having problems of his own, the timing is all wrong to make a real relationship work. As emotions run high, both have a hard time figuring out what is real and what is just convenient.

Bio: Kate McMurray is an award-winning author of gay romance and an unabashed romance fan. When she’s not writing, she works as a nonfiction editor, dabbles in various crafts, and is maybe a tiny bit obsessed with base­ball. She has served as President of Rainbow Romance Writers, the LGBT romance chapter of Romance Writers of America. She lives in Brooklyn, NY.