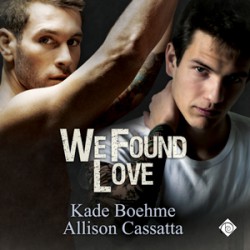 At a Glance: Michael Ferraiuolo gave a great performance, but not great enough to overcome my issues with the characters.

Blurb: It’s no surprise Riley Connors is dealing with issues. He was kidnapped as a young boy, and his parents abandoned him after his newsworthy return. He bounced from foster home to facility and back.

Now an adult, ghosts from his past continue to haunt him. After a suicide attempt, he is locked away in Hartfield so that people can make him tune in to emotions he has tried to bury.

Hunter Morgan had the kind of love that spans ages. But the stress of college and adulthood became too much to handle, and the love of Hunter’s life turned to drugs. After he overdoses, Hunter finds himself soaring out of control on the same miserable path. His brother finds him and calls an ambulance, and the sister Hunter would rather not have calls it a suicide attempt, landing Hunter in Hartfield.

Finding love isn’t easy, but it can happen under the direst circumstances. Together Hunter and Riley may be able to grow from their pain. But they will need to learn to live for themselves, letting love come second.

Review: I really wanted to like We Found Love, but, unfortunately, I didn’t like ninety percent of this story. Riley Connors was too whiny, I mean really whiny, and I just can’t stand weak and whiny characters, no matter the justification. Most of the time he sounded like an adolescent, and I do know what that sounds like!

The ten percent I did like, in spite of the fact I never really bonded with Riley or Hunter (which could be my own problem rather than a reflection of the writing skills of Kade Boehme and Allison Cassatta), was when Riley left the treatment center and took control of his destiny. I also liked listening to the few moments that Riley and Hunter had together in the vacated wing of the treatment center. Those scenes were sensual and filled with a lot of descriptive detail.

My opinion of this audiobook is that the narrator, Michael Ferraiuolo, gave a great performance. He used distinct voices for each character which, when listening to an audiobook in the car, is very much appreciated as it’s a lot easier to follow the story. I will make a point to look for his name in the future. His performance adds a lot to the story, and the ending was great—the road trip HEA ending gets me every time. But be warned—whiny boys are running amuck throughout the story.

You can buy We Found Love here: