Today we’re pleased to have author Jo Ramsey here to talk a bit about her new Harmony Ink Press novel Work Boots and Tees, book five in the Dark Secrets and Hope series.

For those readers who may be sensitive to the topic, please be advised that Jo’s blog post broaches the subject of sexual assault in a non-explicit manner.

When I started writing Work Boots and Tees, book five in my Deep Secrets and Hope series from Harmony Ink Press, I heard some very negative feedback about the idea from other authors. Especially those who had experienced sexual assault or other trauma.

I understand their point of view. I’m a sexual assault survivor myself. And Jim Frankel, the main character of Work Boots and Tees… well, if you’ve read the rest of the series, you know who he is. The bully who sent Evan Granger to the emergency room in Nail Polish and Feathers. The mastermind behind the plan to out Guillermo Garcia in Shoulder Pads and Flannel. And, worst of all, the guy who, as revealed at the end of Shoulder Pads and Flannel, sexually assaulted Chastaine Rollo and another girl, each of whom he was dating at the time. Both times, it was a case of Jim believing he had the girl’s consent because she hadn’t said no; both times, the girl went along with it because she was afraid of what Jim might do if she said no. And that means that both times, Jim committed a crime.

Jim has definitely done some seriously horrible things. No question about that. His bullying of Evan—and others—went on for years before he attacked Evan so severely. And there is never an excuse not to seek consent from a sexual partner. In Work Boots and Tees, I make no attempt to excuse anything Jim has done, but I do show reasons. And I do show Jim trying to start his life over in a new state, living with a cousin he didn’t know existed, after serving time for what he did to Chastaine and Maryellen, while coping with the belief that because of what he did to the girls, he is no better than the man who repeatedly molested him as a child.

Jim is sixteen and for ten years has been dealing with the aftermath of abuse that he hasn’t told anyone about, and the realization that he’s gay has caused him to question, and feel guilty about, whether he enjoyed the abuse. Again, his past trauma does not excuse what he’s done to others, and Jim would be the first to say so. On the other hand, he has a lot of life ahead of him. He knows what he’s done, and he wants to pay for it. Having worked with boys like Jim during my time as a teacher, I have a hard time denying the possibility of redemption for someone who desperately wants it and strives for it.

And that’s why I wrote this book. 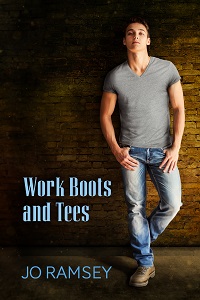 Work Boots and Tees Blurb: When Jim Frankel looks in the mirror, he doesn’t see a sixteen-year-old boy. He sees a monster.

Weeks after being released from a month in juvenile detention, Jim is still trying to come to terms with the realization that he sexually assaulted two girls. He believed everything was consensual—until the day he was arrested. Now he’s served his time as far as the law is concerned, but nothing will erase Jim’s knowledge that he’s no better than the man who molested him at age six.

With his parents unwilling to take him in, Jim moves from Massachusetts to Michigan to live with Delia, his father’s cousin. She offers him a home, a job, and a chance at a new start. Jim spends his time helping Delia at her art supply shop and trying to avoid anyone who might have somehow learned of his crime. When Jim meets Man-Shik Park, he can’t accept Manny’s friendship. But Jim’s attempt to push Manny away might lead to the end of his new life before it’s even begun.

Work Boots and Tees is now available from Harmony Ink Press and through third-party retail sites in both print and e-book formats.

Excerpt: One of the guys who remained came over to the counter carrying a sketchbook and a package of charcoal sticks. He was skinny and a lot shorter than me, with black hair and brown eyes. He looked Asian, but I couldn’t guess which country.

“Hello.” He put down the book and package and studied me.

I looked down at the stuff. “Is this all today?”

“I ordered some sketching pencils last week.” He smiled. “Manny Park. Delia said she’d hold them for me when they came in.”

“She’s out back.” I hesitated. With him standing right there, I couldn’t exactly walk away from the register. Not without pissing Delia off again. “Um….”

Delia came out of the back room, saving me from having to figure out what to do. “Hi, Manny. Your pencils were supposed to be in yesterday’s shipment, but I didn’t see them. I’ll contact the company and find out if they’re on back order.”

“This is my nephew Jim.” Delia walked over to me. “He’s living with me now, so I put him to work. Jim, this is Manny Park, one of the town’s best artists.”

Manny’s cheeks reddened. “I just enjoy drawing. Jim, it’s nice to meet you. I haven’t seen you at school, have I?”

“I don’t go to school,” I mumbled, staring at the sketchbook cover. “Nice to meet you too.”

I walked away feeling like an idiot. Manny wasn’t even close to intimidating, but something about him made me nervous as hell.

Maybe it was the fact that I’d noticed he was good-looking. Kind of cute in a geeky way. I refused to think that way about any guy, which meant I probably shouldn’t be around Manny too much.

I didn’t have anything to do in the back room, so I sat at Delia’s desk and stared at the wall. I really wanted to figure out how to get a tablet or smartphone so I’d have something to do at the shop. Being with Delia was better than sitting alone in the trailer with only the TV for company, but when I had nothing to keep me busy, my brain started going off.

Between the whole thing with the pencils that morning and the stuff I’d brought up with Terry, I had to have a way to shut down my thoughts so I wouldn’t completely lose it.

“Are you okay?” Delia said from the doorway.

Heart racing, I jumped. I should have seen her walk into the room. I was facing the damn curtain. But until she spoke, I hadn’t even noticed her. “Don’t sneak up on me. Um, please.”

“Sorry.” She walked over to the desk. “You were pretty shaky earlier. Did something happen?”

“I had therapy.” If she assumed I was upset about what I’d said to Terry, she might not try to make me talk.

“I had a different therapist this time. I like her better than the guy. I actually talked to her, so I guess that’s good, right?”

“Yes, it is. You must have gotten into some tough subjects?”

“My life is a tough subject,” I muttered. “I don’t want to talk about it. I’m in therapy so you don’t have to listen to all my crap, right?”

About the Author: Jo Ramsey is a former special education teacher who now writes full time. She firmly believes that everyone has it in them to be a hero, whether to others or in their own lives, and she tries to write books that encourage teens to be themselves and make a difference. Jo has been writing since age five and has been writing young adult fiction since she was a teen herself; her first YA book was published in 2010. She lives in Massachusetts with her two daughters, her husband, and two cats, one of whom likes to read over her shoulder.

To find out more about Jo Ramsey and her books, please visit her website, joramsey.com.