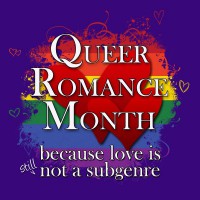 We at The Novel Approach are so pleased to have been able to play a role in the Queer Romance Month celebration. Today we bring you the one and only Amy Lane.

This mini-interview with Amy Lane is brought to you in support of Queer Romance Month.

QRM runs throughout October, celebrating love stories in all shades of the rainbow in all shades of romance. Join us, and over a hundred LGBTQ+ authors and allies, for essays, flash-fiction and much, much more.

All Kinds of Tied Down– by Mary Calmes

The In Death series by J.D. Robb

Matter of Time by Mary Calmes

Jory, from A Matter of Time

I have three flavors– light contemporary, angsty contemporary, and angsty alternative universe–but one universal theme; Family is important– even if you have to forge one of your own.

10. What do you think is the future of queer romance?

I honestly think that as queer rights become more and more mainstream and accepted, the romance itself is going to look much more like het romance. The central conflicts aren’t going to be based around being queer– they’re going to be based around being in love. I think that’s what we want to happen–the stories shouldn’t be special because the characters are queer. They should be special because love really is an awesome thing to have in your life, and everybody should have a chance at it.

Amy’s contribution to Queer Romance Month – “In Search of the Golden Heart” – will be published on 22nd October.

“Rooting for a happy ending, seeing two people as humans and not a “lifestyle”, believing that love really is for everybody—these are powerful concepts.” 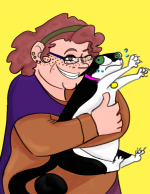 About Amy: Amy Lane has four children, two cats, a love starved Chi-who-what, a crumbling mortgage and an indulgent spouse. She also has too damned much yarn, a penchant for action adventure movies, and a need to know that somewhere in all the pain is a story of Wuv, Twu Wuv, which she continues to believe in to this day! She writes fantasy, urban fantasy, and m/m romance–and if you give her enough diet coke and chocolate, she’ll bore you to tears with why those three genres go together. She’ll also tell you that sacrifices, large and small, are worth the urge to write. 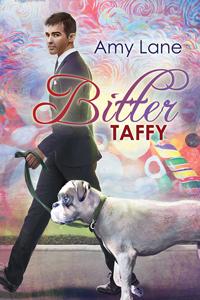 About Bitter Taffy: Rico Gonzalves-Macias didn’t expect to fall in love during his internship in New York—and he didn’t expect the boss’s son to out them both and get him fired either. When he returns to Sacramento stunned and heartbroken, he finds his cousin, Adam, and Adam’s boyfriend, Finn, haven’t just been house-sitting—they’ve made his once sterile apartment into a home.

When Adam gets him a job interview with the adorable, magnetic, practically perfect Derek Huston, Rico feels especially out of his depth. Derek makes it no secret that he wants Rico, but Rico is just starting to figure out that he’s a beginner at the really important stuff and doesn’t want to jump into anything with both feet.

Derek is a both-feet kind of guy. But he’s also made mistakes of his own and doesn’t want to pressure Rico into anything. Together they work to find a compromise between instant attraction and long-lasting love, and while they’re working, Rico gets a primer in why family isn’t always a bad idea. He needs to believe Derek can be his family before Derek’s formidable patience runs out—because even a practically perfect boyfriend is capable of being hurt.

2 thoughts on “Queer Romance Month: An Interview With Amy Lane”