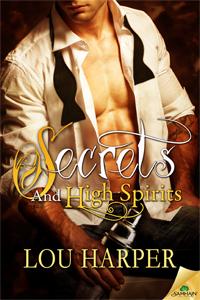 At a Glance: I found this an enjoyable book, and I plan to go back to the first three books to read the stories of the other characters I met in Secrets and High Spirits.

Blurb: Their love is an explosive cocktail—stirred, shaken, and served with a twist.

Teag and Bruce dream of opening their own bars, but that’s where the similarities end.

Teag, a popular bartender at West Hollywood’s hottest club, is willful, opinionated, and likes to take charge. He envisions his future bar as a boozy oasis for craft cocktails. Unfortunately, while he’s big on ideas, he’s short on funds.

Bruce, on the other hand, is a tower of pirate-tattooed muscle with a laid-back attitude. While he’s good with people, he’s a walking paradox—a wannabe boss with a weakness for bossy men.

Their partnership is a natural fit, but every time they meet, sparks fly as they rub each other the wrong way. Or is it the right way? In the heat of the moment, it’s hard to tell.

Between renovation pitfalls, meddling friends, and miles of police tape, Teag and Bruce struggle to keep their venture—and their budding relationship—from going up in flames. And not the good kind. More like the one on the top of a B52 shot.

Warning: Contains a whipcord-lean and whip-smart bartender who knows what he wants—and how hard he wants it—and a go-with-the-flow bar manager who secretly likes to be told how hard to give it.

Review: Secrets and High Spirits was a wonderful read. I was a little nervous about picking up a series at Book Four, but this was a complete standalone and easily enjoyable without having read Books One, Two, and Three. In doing a little research on Amazon, I recognized the names of characters from this book, so my guess is that each book is its own story, and the various characters take center stage in different books. I’ll have to verify with the author to make sure this is right, but it appears to be the case.

Let’s start with the title. It was perfect. The main characters are opening a bar together, and both are adept at mixing drinks…but there’s also a subplot of the history of the building they bought, which had once been a bar called the Blue Parrot. The establishment seems to be haunted by one of the original patrons, although this particular ghost is more of the friendly variety and kind of a presence but not a character.

Along the journey of coming together to become partners—first in business, later in bed—we meet a rich cast of characters who bring humor and depth to the storyline. Each character pushed the story further and helped the reader to better understand the main characters. There is a suspenseful mystery element woven in which helps to ramp up the action and pace of the book. The sex, while infrequent, is very hot when it occurs.

Since the book was more of a novella length, or perhaps a short novel, the relationship between Teag and Bruce was not as fleshed out as if could have been. The two take a while to lower their guards and accept the other one in. This slow process helped to ramp up the tension and to build suspense and maybe a bit of anxiety as we read to find out how they will find one another. Once they are together, the stresses, fears, and misunderstandings that threaten to tear brand new relationships apart are not as fully developed. For instance, when Bruce sees that an old lover had called Teag, it could have been a great catalyst for the two characters to hit a conflict only to work through it and become stronger because of their struggle and communication.

In the end, I found this an enjoyable book, and I plan to go back to the first three books to read the stories of the other characters I met in Secrets and High Spirits.

You can buy Secrets and High Spirits here: