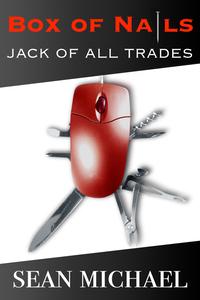 Title: Jack Of All Trades (Box Of Nails: Book Four)

At a Glance: Unfortunately, Jack of All Trades is not one of this author’s better works.

Blurb: Brad is crashing in his cousin Stephen’s room while he tries to sort out his life. A perpetual student, he still hasn’t settled on a major after a half dozen years at University. He loves learning, but so far that’s the only thing that’s been a good fit.

Dill is a full-time Dom who hasn’t found the right sub yet. He’s not worried about it — he figures it’ll eventually happen and in the meantime, there’s plenty of boys at the Hammer Club who are eager to share a scene with an experienced master.

When Brad and Dill meet at a party at Barney and Devon’s house for subs, the attraction is immediate and undeniable and Master Dill feels that Brad is the perfect sub for him. He also believes that as his submissive, Brad will learn the focus he needs to fulfill his potential and find satisfaction with his life. Now he just needs to help jack-of-all-trades Brad see they belong together

After arranging for Brad to become his intern who will help research his many articles concerning the D/s world, Dill begins to wear down Brad’s resistance to trying out the lifestyle for himself. With much gentle reassurance and a heap of nudging, Brad seems ready to consider the idea he could be a submissive—but, will he be willing to explore that with Dill as his Master? Only time will tell.

If you know anything about Sean Michael’s work then you know it is filled with hot sex and varying degrees of BDSM, and Jack Of All Trades is no exception. Honestly, were this a piece of erotica and not a novel that should have a serious and steadily moving plot, I could have given this story five stars and called it a day. There is no doubt that this author can churn out one hot sexual scenario after another. In fact, the Doms that proliferate this author’s books are always kind, gentle and fully invested in their submissives, even when that means pushing them well beyond their comfort zone and exploring deeply ingrained painful memories that often seem to go hand in hand with being a submissive in one of Sean Michael’s stories.

Jack of All Trades delivers on this successful formula of needy sub and patient Dom quite nicely. However, what’s lacking here are the specifics surrounding Brad’s insecurities. I never really got to know Brad on any other level than he was a virgin and in need of being told it was okay to explore BDSM. He seemed to have no real family, there was no real meat or hidden reasons behind his inability to commit, and, to be frank, I was hard pressed to see his character’s growth throughout the novel. Other than his committing to a relationship with Dill, Brad remained one-dimensional and I am sorry to say, rather boring.

This novel fell short merely because it failed to establish what was really the root of Brad’s inability to commit to life—whether that be a college major or being Dill’s submissive. Instead, there was simply heaps of great sex and little else.  I found myself wanting this story to move on—to get to the point where Dill would dig deep enough to see why Brad was so adrift. Instead, he took the man into his home, gave him a rather contrived “internship” by becoming his “patron,” and introduced him to the world of BDSM. Other than Brad agreeing to becoming exclusive and willing to “try” the lifestyle, I failed to see any real change in either character. Hence, we had a series of sex scenes tied together with very little plot.

Sean Michael has turned out some very good and provocative novels where the characters develop and change, finally growing into a less wounded and more complete person. Unfortunately, Jack of All Trades is not one of this author’s better works and therefore, fell short of the kind of stories this author is capable of producing.

You can buy Jack of All Trades here: