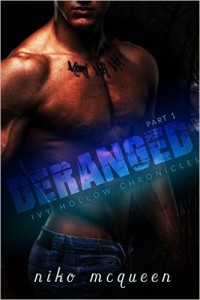 At a Glance: Deranged needed a bit more storyline for me to buy into its romance.

Blurb: Adam Rossmore is a rich party boy who doesn’t answer to anyone. He’s played the orphan card for too long and it’s gotten him out of every DUI, arrest, and fine.

When a judge slaps him with community service at the insane asylum, Ivy Hollow, Adam thinks it’s all a joke. Until the doors lock and he starts meeting the residents.

Christian Hale has lived at Ivy Hollow his entire life. He seeks solace in his music—and whatever orderly happens to be nearby.

When Adam hears Christian play the piano for the first time, the music draws him deep into Christian’s web and he must fight an arousal that is both confusing and exciting.

Review: Sometimes a blurb makes a book irresistible, and I was totally hooked by the premise of Niko McQueen’s Deranged. The idea of music and one man’s affliction coalescing into a love story is one you don’t run across often, and I wanted to see what the author did with it.

Christian Hale’s mental breakdown isn’t spelled out to the letter when the story begins, but we do get just enough innuendo to know what’s happened to cause it. The scene was written in a way that vaguely reminded me of the movie Shine and David Helfgott’s psychological collapse during the Rachmaninoff solo—an intense and slow motion wreckage of a man’s mind caught in the grasp of his music. Christian’s psyche shatters while playing the piano, but the story then fast-forwards without offering any more information about the schism, so we can only assume that his suffering at the hands of someone he thought he could trust has lead to the PTSD-like episodes we’re told about later.

Adam Rossmore is a musician in a band, though details about that are sketchy at best. We do know that he’s an arrogant party boy womanizer, though, and in spite of him thinking he’s above the law, he’s finally used up all of his get out of jail free cards when he’s busted for DWI, so one bender too many offers him two choices—community service at Ivy Hollow, or prison time. Adam is advised by his attorney/uncle to choose what should be the lesser of those two evils, and, of course, Adam isn’t happy about either, but Ivy Hollow gets one-hundred-fifty hours of his service. This is the basis for the setup of the story’s romance, and I have to say I had a difficult time buying into the idea of what boiled down to live-in community service as a means of plopping Adam into Christian’s orbit. I’m no expert on community service, though, so maybe it is a thing.

And now, here’s where I get to be nitpicky and difficult. Not only that, but I also get to start by saying that I really wanted to love this story so much more than I did. In the end, Deranged didn’t work for me because it left too much plot and character development on the drawing board, which, for me, left the story hobbled and the romance not terribly credible. I can buy into the insta-love romantic trope, but I need something to make it believable, and there just wasn’t enough narrative in this story for me to do anything but try and fill in the blanks of an already difficult relationship to grasp hold of. I can’t go into much detail without giving up spoilers, but suffice it to say that the plot didn’t allow its characters to evolve in a way that made their relationship convincing. A common love of music is great, and would have been a fantastic foundation to build something on, but the attraction starts out with lust and ends with sex, with no real exposition of why we should believe these characters belong together long-term, and, all told, that wasn’t enough for me to root for them.

In addition to the insta-love theme, Adam is also straight, so this is a gay/bi/out-for-you story as well, an idea that, when done well, is one of my favorites in the genre because it supports one of the more romantic tropes—that labels can mean squat. But again, going back to the insta-love the story leaned on, I didn’t see much from Adam to make me believe he’s got any feels for Christian that go anywhere beyond lust and curiosity. We get a lot of inner monologue and self-directed incredulity that he’s hot for Christian, but that’s angst not character construct, and there were too many important details missing for me believe that Adam had fallen in love with another man. Add to that a conveniently timed and somewhat coincidental side-story that introduces Christian’s “real” one true love, a guy who appears and then disappears again within the space of a mere few pages (there are several other characters who are introduced then do little more than serve as set dressing as well), and all it really does is give Adam the chance to show his jealous and possessive streak.

Overall, this novella all went rather sideways for me. What I was left with at the end of Deranged is the impression that sex was the magical cure-all for Adam’s straightness, and that Christian was in no way healthy enough to be the guy Adam should be hanging his future happily-ever-after on. His mental instability, whatever it is, and the cause of it, is sort of brushed off as a non-factor, which was too bad because I think it could have been a really compelling part of the storyline.

As much as I loved the idea of this novella, and in spite of there being some sexy moments, Deranged left me wanting.

You can buy Deranged here: