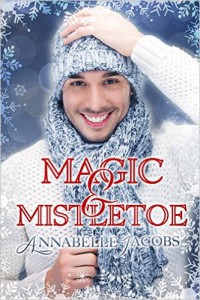 At a Glance: Annabelle Jacobs has the recipe for holiday magic and romance all sewn up in a sweet little package in Magic & Mistletoe.

Blurb: Christmas is Harry’s favourite time of the year, but it looks like he’ll be spending it alone. When it comes to the men he fancies, his luck is non-existent. Harry’s nerves always get the better of him—especially when he tries to talk to Andrew, the hot guy downstairs.

Everything changes when Harry meets a mysterious girl in the woods who professes to be a witch. He dismisses her claims, but when odd things start happening to him, he has to reconsider.

Andrew was attracted to Harry from the start, but their awkward encounters put him off. All goes well until Harry opens his mouth—and ruins it with his stupidity and silly comments. When Harry suddenly becomes more relaxed and they have a proper conversation, Andrew realises his first impression was wrong. As the days count down to December 25, they get swept up in the Christmas spirit and their relationship moves faster than either expected.

A little winter magic might have been the push they needed, but Harry worries that when it wears off, he’ll no longer be the man Andrew wants.

Review: Harry has a problem with overstating the obvious. He gets tongue tied and has a tendency to blurt out the first thing that comes to mind—even if that thing makes him look like a bit of a git for pointing out stuff that doesn’t need pointing out. He’s gotten so tongue-tied around his sexy neighbor, and has managed a near perfect record of saying the wrong thing at the right time, that Andrew thinks Harry’s nothing but a big jerk. Which sucks for Harry because Andrew is a guy he’d really love to know better.

Annabelle Jacobs has the recipe for holiday magic and romance all sewn up in a sweet little package in Magic & Mistletoe, a title I couldn’t resist any more than I could its adorable cover. A walk through the woods with his friends brings Harry face to face with a woodland nymph who decides to take matters into her own hands where Harry’s concerned, and gives him the gift that keeps on giving—namely, the ability to keep his gob shut when he’s about to put his foot in it again.

Little coincidences, surprise favors, helpful nudges (a fortuitously placed mistletoe here and there) all serve to bring Harry and Andrew together. And then, of course, the magic isn’t only of the supernatural variety, if you catch my drift. It turns out that these two guys are pretty great together. But… is that because of Harry’s interfering helper? And if so, what possible hope does Harry have of keeping Andrew once the spell wears off and Harry goes back to being his usual tongue-tied self? This is where we get a little bit of angst in this otherwise feel-good holiday romance, just enough to give us a reason to cheer for the story’s happy ending.

It’s a good thing Christmas comes but once a year because I don’t think my heart could take being warmed so thoroughly the other twelve months. Magic & Mistletoe is another check mark in the winter romance win column, and a book that’s sure to bring you a little holiday cheer.

You can buy Magic & Mistletoe here: