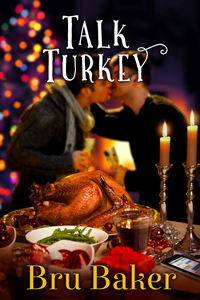 At a Glance: This is an incredibly delightful tale of turkey woe.

Blurb: Carson is a California transplant settling into life in the Windy City. On his first Christmas away from home, he assures his worried family he’ll be having a real Christmas dinner.

Recent culinary school graduate Tom Stockton earns some extra money giving out cooking advice at the Talk Turkey hotline. Tom’s honeyed voice and sharp sense of humor are attractive to the lonely Carson, and Carson finds reasons to call the hotline again and again. But on Christmas Eve, Carson’s call is less playful and more panicked with the big meal looming. Carson is just looking for advice, but Tom has a surprise in store that might lead to much more.

Review: Carson has been in Chicago for less than a month, and the loneliness of his existence is starting to overwhelm him. Too new in his job, he doesn’t have the option of vacation time to go home to California for the holiday.

“It said a lot about Carson’s current state of mind that he’d named the turkey currently taking up a good three-quarter of the real estate in his refrigerator. Sure, he’d be eating it. But that didn’t mean he shouldn’t name it. Especially since it was doing such a great service for him, being his sole companion for Christmas dinner. At the rate it was defrosting – which was interminably slow – it would be coming as a guest and not the meal, which was all the more reason to name it.”

Carson is in such a state because of his turkey that he calls the turkey hotline number he found in the grocery store, and meets Tom – a recent culinary school graduate who is working the hotline for extra cash during the holidays. What follows are delightfully well written and witty vignettes of Carson’s turkey troubles, and Tom’s sage advice peppered with a sharp sense of humor. Bru Baker writes a moving story of a young man navigating his first holiday on his own with uplifting humor and amusing secondary characters. The fact that Carson’s mom set up a Pinterest page for him with turkey boards is refreshingly current and relatable. How the author puts the two men together was ingeniously clever and had me laughing out loud.

I am becoming a huge fan of Bru Baker, she is an excellent writer whether the story is long or short, and I can’t wait to read more of her work.

You can buy Talk Turkey here: