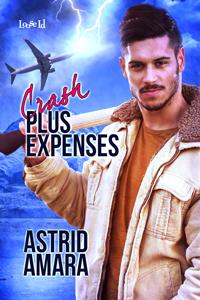 At a Glance: I love these types of romances!

It’s also a problem because he knows there’s a secret behind Connor Katz’s past, a reason the man’s sister is paying beaucoup bucks to have him followed, a reason Connor appears so quiet on the outside, yet seems lit like a fire from within. Dan needs to know Connor’s secret.

But if they survive the crash, how on earth can Dan get to know the mysteries of a man he’s been in love with from afar without admitting he’s a private eye who’s watched his every move?

Review: I’m a big fan of Astrid Amara’s contemporaries. I love her brand of humor and the way her MCs are thrown together so that they have no choice but to get to know each other. Crash Plus Expenses doesn’t waste any time, starting as the plane is about to crash. This part was kind of intense and reinforced the very reason why I avoid flying in planes. But, as the plane prepares for its quick downward landing, there’s a brief summary as to why Dan is on this particular flight. He’s also got a bit of a crush on the man he’s been paid to follow for the last year.

I’m going to spoil things by saying, “Yes, they both survived the crash,” buuuuut now comes the fun part—surviving the wilds of Alaska as they wait for rescue.

I love these types of romances! I loved Dan’s character and how human he was when he let the cat out of the bag about things he shouldn’t know about Connor (oops). Dan really has it bad for him, and the letter he eventually writes to Connor had me giving it a great big aaaaaaah, how sweet.

As for Connor, Dan is his hero…until he learns more about Dan and why he was on that flight (that was an interesting fall out). Connor did have some pretty good secrets from his past, and it’s quite understandable why he was suspicious in nature.

I had trouble putting Crash Plus Expenses down. It just hit all the right buttons for me, and I made the mistake of starting this one before bedtime, then ended up going to work the next day, tired! I will add, if you’re one who doesn’t believe in coincidences (because there are some things that are a little unbelievable that occur throughout the story), this may not be your cup of tea.

I definitely see a sequel…and, lo and behold, as I was getting ready to start this review, I found out there is one (Hanukkah on Retainer)! Guess who went to ARe and bought it without hesitation?

You can buy Crash Plus Expenses here: