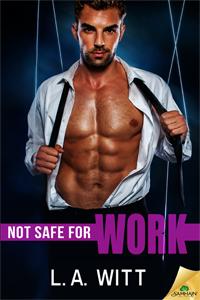 Title: Not Safe for Work

At a Glance: This is another great hit from L.A. Witt!

Blurb: They’re a match made in the dungeon…until their secret gets out.

Bored senseless in a meeting, architectural modeler Jon McNeill amuses himself with a kinky dating app on his phone. Then the app matches him with another user…who’s six feet away. Suddenly Jon finds himself on the same page as someone way above his pay grade: millionaire property developer Rick Pierce. His firm’s biggest—and hottest—client.

The app isn’t kidding either. They’re a perfect match. Jon’s a Dom, Rick’s a sub, and bondage is their thing. Both guys are well into their forties, know their way around the bedroom, and definitely appreciate a good suit. And the best part? They’re a match outside the bedroom too.

But office relationships aren’t easy to keep a secret. When the truth comes out, Jon is certain he’s about to get fired. Instead, his bosses throw him a curve ball—an ultimatum that puts both his job and his relationship in jeopardy.

Warning: Contains literal and figurative sex machines, blindfolds, a sub being punished during a business meeting, enough rope to tangle up a millionaire, and a Golden Girls marathon.

Review: Jon McNeill is an architectural modeler. Rick Pierce is his firm’s biggest client and the reason the architectural firm is solvent. Jon has been told not to talk to clients, which ordinarily is something he has no problem with–until he hooks up with Rick on a kinky dating app. Jon is a Dom, and finding a sub as perfect as Rick is something that, at this stage in life, he thought he would never find.

L.A. Witt’s Not Safe for Work is so well written. It was refreshing to read how two men in their mid-forties navigate the real world and make their love and relationship work–I found this mature romance engaging, and the Dom/sub dynamic totally believable because these men had a very clear idea of what they wanted vs. what they needed from the relationship. I loved these characters and how they came alive off the page. I could practically smell the glue in Jon’s workroom. The secondary characters are interesting and keep the humor going when the emotions get heavy between the two men.

You can buy Not Safe for Work here: