At a Glance: Maps is truly special; I’ll take any glimpse into his world I can get!

Blurb: Maps’ kingdom is crumbling before his eyes.

His parents are forcing him to get a job, there’s a new kid at school who won’t stop staring at him, and his best friend is too busy thinking about girls to help Maps deal with his real problems.

And none of the roads on his map are leading to Lane.

Review: Maps is back!! I was full on laughing out loud on the first page, and thought I was quite possibly going to highlight the entire book. Seriously, though, Nash Summers has done it again. Diamonds, the second book in what I hope will be a very lonnnnnnng series, will run you through all of the emotions, as did Maps. Mattie ‘Maps’ Wilson is my hero; I sincerely think I could read books about him for the rest of forever. And, the title of the series is perfection. Even though the books are each only around seventy pages in length, you truly do feel like you’re getting a crash course in ‘Life According to Maps’.

This story begins as Lane is away at baseball camp, and Maps feels very unsure as to where they left things. He’s biding his time, driving his parents and his best friend Benji crazy, as per usual, but he honestly feels unbalanced with Lane gone. As hysterical as this book is in so many places, there are also some very real emotions here…some very growing-up type things that both boys are going through. Insecurities, some thoughtless self-centeredness that is typical teenage stuff, and the all-consuming power of young love, all brilliantly showcased with the perfect combination of heart and humor.

I have to mention that we also meet a couple of new players – one in particular, Perry, who I LOVED – which makes me wonder if there really is more to come for these guys, and possibly the secondary characters. A girl can dream, right?

I’ve read quite a bit of this author’s work now, and I marvel at how well she writes such incredibly different types of books. I am absolutely a fan. All of her stuff is great – but, Maps is truly special; I’ll take any glimpse into his world I can get! Diamonds was a wonderful follow-up to the first book – I can’t recommend this series enough.

You can buy Diamonds here: 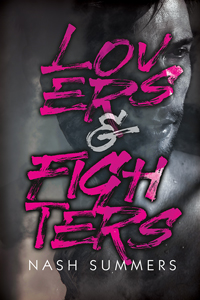 At a Glance: I hope you guys will give this beautiful story of love and redemption a try!

Blurb: Scott Halleck and Julian Reeves are polar opposites in almost every way. Scott, a modern arts curator at a museum in Chicago, relishes the finer things in life. Julian is a strange photographer whose hair color changes as frequently as his mood. As far as Scott can see, Julian is an erratic know-it-all who lives his life one day to the next. To Julian, Scott is an uptight, too-coiffed perfectionist.

As the two men continue to run into each other, their dislike grows, but beneath that animosity, a fire is beginning to spark. Scott is baffled when he realizes he is falling for Julian, a man who burns hotter than a wildfire. Scott will have to decide, for the first time in his life, if he’ll let the flames take over.

Review: Nash Summers is a multi-faceted talent. She has brought us the quirky and hilarious Maps, as well as the hauntingly beautiful fawn. Her new release, Lovers & Fighters, is equally mesmerizing and gorgeously written, though extremely heavy and dark. It is definitely not your typical M/M romance…which is one of the things I loved about it.

The book starts out hilariously, with a very perplexed and taken-aback Scott having his footwear berated by the extremely colorful ‘Mark’. I loved how the author jumped right in, giving us a little piece of each of their characters. The entire book is in Scott’s POV, but Summers did a great job of also showing us Julian, through their various encounters, as well as how the book was written in each of the scenes. The writing and the descriptions and imagery when Scott is alone, or with another character who is not Julian, is very…careful. Quiet. But, when he is with Julian everything is more explosive and vibrant. Alive. Mimicking how Scott feels when he’s with him.

Scott has always thought that he needed a man like Ryan, an older man who was “safe”, and could be his quiet comfort, when what he truly needs and craves is someone like Julian, someone who can make him feel. On the other hand, Julian burns too brightly on his own, and needs a man like Scott to keep him tethered. He needs someone safe. The big question in this book is, can they ever stop hating each other for long enough to figure out how close they are to loving each other?

I’ve talked in other reviews about what a beautiful writer Nash Summers is. I would be remiss if I didn’t share just a couple of examples of her gorgeous prose and dialogue. I also can’t tell you how difficult it was to choose just these three passages…

These photos demanded attention like the fall demands the frozen chill of winter to create a clean white slate to blanket over its mistakes. I wanted to reach out and touch them, to feel the glossy finish of them against my fingertips in hopes that some of their life would come away with me.

“Have you ever seen anything more beautiful than a carousel? They’re made of magic, and here we are, lucky enough to not only be witness to it, but allowed to come along for the ride,” Julian said.

When I was near those pieces of artwork, I felt like they were fallen stars from somewhere in the heavens that became fed up with the perpetual brightness of themselves and decided to drop down to earth.

Lovers & Haters is SO full of emotion. They are sometimes very in-your-face emotions that are tough to read…but, these are real guys, with real problems. Much of it was heart-breaking, but there were also uplifting, hopeful moments mixed in. I hope you guys will give this beautiful story of love and redemption a try!

You can buy Lovers & Fighters here:

At a Glance: Nash Summers is such a talented author. I can’t wait to see what she has in store for us in the future.

Blurb: Heaven is rays of sunlight dancing slowly on wheat stalks. It’s wind twirling itself around chimes hung from low tree branches, and robust bursts of scent and color, far beyond anything describable with words.

Heaven is a flightless crow, a promise of forever tied to a necklace, and hidden love letters tucked away safely inside a tree.

Heaven is a fire-haired boy named Rust and his love for Ancel, a boy full of storm clouds.

Heaven is all the tiny threads of hope that hold them together.

Didn’t he know how precious he was – how important it was that he keep himself safe? He was the most beautiful thing I had ever dreamed about, and yet he was covered in angry patterns that reminded me of how very human he was. – Nash Summers

After devouring Maps, I went to see what else I could get my hands on by Nash Summers, and discovered that she had an entry in this year’s Goodreads M/M Romance Group’s “Love is an Open Road” event. The story is called fawn, and what a treasure it is.

fawn is unbelievably beautiful. The writing and the characters are absolutely gorgeous. Rust is so indescribably unique and wonderful; I’ve honestly never read a character quite like him. And, Ancel is so broken and lost, and feeling even more lost because he doesn’t know how to deal with the way Rust makes him feel – which is, alive. Look at this passage…

Rust kissed like the ocean kisses the sands on the shore of a beach when the tide comes in. His soft lips opened easily, pressing against my own coyly. He shivered when I pressed my tongue into his mouth, and I thought just then I might liquefy.

And, one more, from Rust’s POV…

I was nothing like Ancel. I wasn’t made of glaciers and the midnight sky; I was made of the grass in the field, the warm breeze that flowed through it, and the dirt under the heels of my shoes.

There are so many beautiful words in this story. I’ve shared three snippets with you, and that doesn’t come close to showcasing the poetry to be found here. Rust’s passion and spirit, and his and Ancel’s story, will get right under your skin.

This was a beautifully executed short story. Long enough to give you everything you need to become invested, enough that it all comes together, even leaves you wanting more, but doesn’t leave you hanging, or with any type of rushed resolution. Nash Summers is such a talented author. I can’t wait to see what she has in store for us in the future. 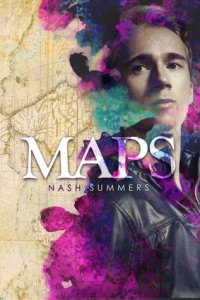 Blurb: If Maps ruled the world, his best pal Benji would be court jester, and every day would celebrate a new experiment.

If Maps ruled the world, his best pal would still be living next door, and there wouldn’t be any gap-toothed new guy staring at him as if he’s bonkers.

Mattie Wilson, aka Maps, is extremely bright, quirky as hell, neurotic, and HILARIOUS. And, I completely adored him. He and his best friend Benji have grown up next door to each other, but Benji has to move a few blocks away, leaving Maps vulnerable to dealing with…dun dun dunnnn…new neighbors. He is pretty sure his life is over – but, he’ll soon find out that perhaps it’s just beginning.

One of the new neighbors is a boy just a year older than Maps, a handsome jock for whom Maps starts having confusing feelings. Lane is incredibly sweet and kind. He really sees Maps, and as they get closer, he starts developing some confusing feelings of his own. I loved how, at first, he didn’t know what to do about his attraction to Maps – but, as soon as he realizes how much he misses him, and that he might lose him, he knows exactly what to do—whatever it takes to make Maps his. Including giving unbelievably creative, thoughtful, and romantic gifts that will leave you in a puddle right along with Maps.

The writing is so sharp. There were quite a few scenes, and what quickly became ‘classic Maps moments’ – his many “very manly” squeals/shrieks/squeals, for example – that had me laughing out loud. All of the characters were wonderful. The friendship between Maps and Benji was fantastic. The whole thing was adorable and sweet (but, not toothache, blergh sweet), romantic as heck…and, did I mention FUNNY? Oh! And, there is a sequel in the works!!! Can’t wait for Diamonds. :)

You can buy Maps here: