At a Glance: Once again Theo Fenraven gives us a thoughtful story. Highly recommended.

Blurb: Abandoned by an industry that has been decimated by the economy, and struggling in a marriage that isn’t quite the stuff of dreams, Jon Donovan is ready for a change.

It appears in the shape of Cass Allen—as comfortable in a skirt and heels as he is in jeans—who has happily spent his life drifting from place to place and job to job.

Pragmatic and practical meets mystical and magical as they start a new business, help solve a murder, and are blindsided by a devastating betrayal neither of them saw coming.

The tiny house community has two new advocates, but Jon and Cass will only find their happy ending if they are willing to give up who they were and become the men they are supposed to be.

Review: When you reach a point in your life where you are certain you cannot survive one more hit, you know it’s time to make a change. Jon has lost just about everything a man could lose, the land he loves, a startup business that was a dream come true, a wife he thought loved him, almost everything but the shirt off his back, all except for Cass.

Cass, beautiful, mysterious, and with the ability to calm Jon like no other, enters his life and reopens a door he felt was closed. Cass is as fluid as they come; delighting in a skirt as much as a pair of jeans, he has just that touch of mysticism that will set him apart from any man Jon has ever met. The two venture into a business deal only to have it literally stolen from them by the one person Jon trusted other than Cass—his wife.

Now Jon must start again, but how? And where? Florida has been his home for many years, but the next opportunity will take him far afield and the real question is, will Cass remain a part of his life, or be one more thing he has lost in the process of beginning again?

Half Moon House by Theo Fenraven explores what it means to take risks. Jon and Cass both throw caution to the wind in many ways in this novel, from the business they begin (construction of tiny homes often measuring less than 300 square feet), to becoming involved in solving a local murder. With energy the two men embrace the unknown. What they did not expect was to be thwarted and nearly destroyed by those who pledged to love them. However, adversity brings to the fore our best and worst qualities, and this author chooses to dwell on the indomitable spirit inside that will carry these men through the darkest of time.

The beauty of Mr. Fenraven’s writing lay in the descriptive passages of the land Jon owns and of the friend he has found in Cass. One can almost feel the gentle breezes rolling off the water and see the variety of wildlife that inhabits it. Then the gorgeous scenery wraps around the two men who have made it their home and we are mesmerized by the way this story unfolds, and we learn so much about what makes these two men tick. More than that, we learn to appreciate what we have and how to make sure that through wise stewardship we will have it for years to come.

Half Moon House is much more than a romance. The novel introduces a way to live life to its fullest by conserving and preserving our time on earth. The fact that a bit of mysticism and mayhem was thrown in the mix only served to make this incredible story that much edgier. You feel every struggle and blow that fall on Jon and, by association, Cass. Thankfully you also experience their grit and determination to survive and thrive on their terms and no one else’s.

Once again Theo Fenraven gives us a thoughtful story and leaves us with a reminder to appreciate each moment and person that comes into our lives. I highly recommend Half Moon House to you.

You can buy Half Moon House here: 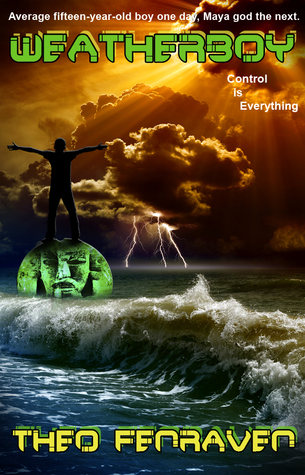 Blurb: After fifteen-year-old Tuck finds a Maya artifact while on vacation in Guatemala, his whole life changes. To his surprise, he discovers he can make it rain and snow. A local weatherman happens to be around when Tuck creates a waterspout near his home in Tarpon Springs, Florida, and the next thing he knows, someone from the Department of Homeland Security is picking him up at school and taking him to their offices in Orlando. From there, things only get weirder and more dangerous when he’s escorted to Washington, D.C. END_OF_DOCUMENT_TOKEN_TO_BE_REPLACED

Title: Not Quite Shakespeare

Blurb: Take a ride to Northern Scotland on the famous train, the Jacobite, and rediscover desire. Get lost in the Peace Maze in Northern Ireland during a downpour and let a handsome young redhead come to the rescue. Take a tour of historical Blackpool on the English coast and set the stage for the perfect romance. From England to the outer isles, the UK holds treasure troves of romance, history, intrigue, and—naturally—quirky British humor. Not Quite Shakespeare samples it all in fifteen stories. END_OF_DOCUMENT_TOKEN_TO_BE_REPLACED

“Time is the longest distance between two places.” ― Tennessee Williams

Blurb: Photography genius Ethan Mars is out and living the fast life in Los Angeles until a mysterious mist in Topanga Canyon sends him back in time. There he meets Quinn Parker, a farmer who has hidden his homosexuality from everyone, even Margaret, his fiancée. Falling in love is the last thing Ethan expects, and the last thing Quinn can allow—in 1863, being gay can get him killed. When Ethan is unexpectedly offered a way home, he faces an impossible decision: go back… or stay?
END_OF_DOCUMENT_TOKEN_TO_BE_REPLACED