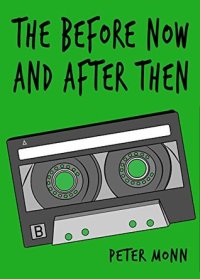 The question I get asked the most about my book The Before Now and After Then is “what is it about?” which I actually think is kind of a difficult question. Many people think it is a story of grief or a story of bullying, or even a story a just being a gay teenager, but that wasn’t what I planned when I started. For me, writing is like borrowing someone’s life for a while and entering their world, making observations of your own and trying to stay out of the way as the story unfolds. All I ever really wanted to write was a simple love story between two teenage boys, Danny and Rusty, but they just weren’t willing to have it be that way.

Blurb: Danny Goldstein has always lived in the shadow of his identical, twin brother Sam. But when a hurricane of events forces him into the spotlight, he starts to realize that the only thing he’s truly afraid of is himself. With the help of his costume changing friend Cher, a famous gay uncle with a mysterious past of his own, two aging punk rocker parents and Rusty, the boy who will become his something to live for, Danny begins to realize that the music of the heart is truly the soundtrack for living. END_OF_DOCUMENT_TOKEN_TO_BE_REPLACED