Title: The Love of Wicked Men

At a Glance: Season one of The Love of Wicked Men is undeniably one of the best novels I have ever read. I highly recommend it to you.

Blurb: Power, lust, legal intrigue. This is where sex and injustice meet.

Sid Rivers and Jack Brown are two sides of the same coin. One is a lawyer with his own firm and dreams of money and power; the other is a criminal with a lengthy record and a quest for vengeance. When they meet, sparks fly. But was their meeting an accident? Or, was it planned by the billionaires who want to control their destiny?

Review: Begun as serial installments, where fans help shape the trajectory of each part, The Love Of Wicked Men is now published as Season One: Parts 1-6, in a gloriously long novel guaranteed to make your head spin at the sheer volume of players and the multi-layered plot. However, at the heart of this tour de force are two men, both superior at dispensing their own brand of justice, rather cavalierly cutthroat in their business dealings, and yet deeply loyal to somehow rectifying what they see as the greatest failure in their pasts. Both, you see, lost someone dear to them and are determined to either bring the culprit to justice or eradicate the memory altogether.

Sid Rivers has been reinventing himself for so long even he is unsure how to reach the real Self inside. A hungry lawyer bent on making money and forgetting his rather tawdry past, he will stop at nothing to feed his immense ego and bury the pain he carries inside. Jack Brown wants nothing more than to see his sister’s death avenged, and if that means risking the team who has been by his side for years, helping him fleece corporate America, then so be it. Somehow, whoever has contacted Sid with the latest way to rape another law firm, and make big money in the process, holds the key to unraveling the mystery Jack has been trying to crack for years.

No one and nothing is at it seems, and trust is nowhere to be found when these two men meet, but there is something there—something indefinable sparks between them, and a hunger neither has ever known before rears its head and locks Sid and Jack together. This goes deeper than simple lust. The feelings that develop as these two men play a dangerous game of cat and mouse with unseen enemies run much deeper than easing a sexual itch. Espionage, abductions, near death experiences all combine to create a ticking clock that pushes Sid and Jack further down a rabbit hole, where the only escape may be someone’s death.

My brain is buzzing. There was so much to this novel, and it was all written with rapier-sharp clarity, intriguing drama, and the hottest coupling of two admitted foes ever seen. I have enjoyed many pieces of work by author Brandon Shire, but this boxed set of six episodic stories was beyond anything he has ever written. The vast array of characters, the interweaving of two strangers, whose lives have such similar back stories, and the twisted and cleverly drawn plotlines makes this massive novel an absolute masterpiece.

There appears to be so little redeemable about Sid; from his over inflated ego to his nasty way of dismissing those he deems beneath him, I truly wondered how I could ever bring myself to care about whether this guy lived or died—in fact, I was rooting for the latter. Then Jack came on the scene and he knew—he saw all the vulnerability, the stains from a past that brought Sid to be who he was, and Jack felt something for the man despite his smarmy exterior. And, slowly but surely, we did too. To say these two had chemistry is to compare a nuclear reactor to a third grade science kit. Explosive does not begin to describe these men and every encounter they have.

I cannot pinpoint one thing that should make you read this book. I can only tell you that this novel is so compelling that I devoured it in record time, and may have whimpered at the end when I read that a second season may be planned. Season one of The Love of Wicked Men is undeniably one of the best novels I have ever read. I highly recommend it to you.

You can buy The Love of Wicked Men here: 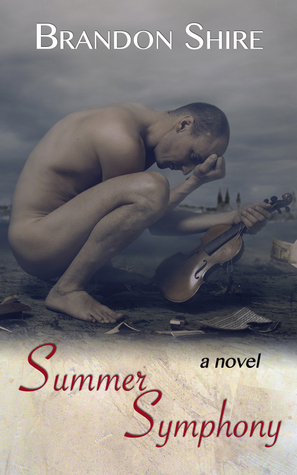 Blurb: Martin Zoric had vivid dreams of fatherhood, of a small hand pressed to his, of pink dresses and girlish laughter. Then his wife had a stillbirth and his world fell apart. He listened to the unwanted apologies, stood by his wife as was expected of him, and kept his façade strong and firm for the entire world to see. END_OF_DOCUMENT_TOKEN_TO_BE_REPLACED

Death ends a life, not a relationship. – Mitch Albom

The following is being provided as a free public service guide: How to survive Brandon Shire’s, Listening to Dust. By: Yours Truly

Step One: Secure a butter knife (preferably rusty) and a rubber mallet.
Step Two: Place butter knife, blunt tip facing chest, somewhere in the vicinity of the heart, ensuring the blade’s trajectory will aim between the ribs so as not to hinder its progress during this carefully orchestrated procedure.
Step Three: Holding the knife in your left hand, firmly grasp the rubber mallet in your right; then use the mallet to hammer repeatedly on the knife handle until the rusty (recommended) blade passes through the skin and muscle, and lodges neatly into your poor, abused heart, being careful to avoid any major arteries, as bleeding out too quickly will prematurely relieve the agony, and really, who wants that?
Step Four: Once butter knife has been wedged firmly in the cardiac muscle, twist in earnest for maximum effect.
Step Five: Twist again just because.

There, see? That wasn’t so bad now was it? And trust me when I say it will make reading this heartbreaking story of love and denial and loss feel like sunshine and rainbows in comparison.

Listening to Dust is an uncompromising story of the tragic ending to a romance that, truth be told, was destined to fail before it ever began. Dusty Earl is not a man who will ever find peace in or escape from his own sexuality in spite of the fact that the months he spent with Stephen Dobbins, when Dusty was able, for that brief time in his life, to become Dustin and to grasp hold of an ephemeral and ever elusive thread of equilibrium, had maybe caused Dusty to feel something like a quiet place amidst the confusion and conflict born in a place to which he knows he’s obligated by duty to return one day.

This is a story told in a series of memories and letters, as well as in conversation between Stephen and Dustin’s younger brother Robbie, a young man whose inherent innocence, kindness, and compassion supersede the unfortunate impairment that has caused him to be mislabeled a dummy, and precludes the fact that he’s awaiting a verdict from the jury in a trial in which he’s being prosecuted for murder.

This book is an illustration of the influence of bigotry on a man from a small Southern town, a place from which Dusty escaped, joining the military in hopes of eventually being able to provide a better life for Robbie than the one they’d ever been offered within the extreme dysfunction of their family. It is a story of a modicum of freedom found three-thousand mile away, in a place where Dustin was able, for once, to withstand the burden of his self-loathing because he’d finally found someone who made it all a little easier to impersonate a man who will suffer a shred of reason in his unreasoned world. It was a place where, for a moment, Dustin was finally able to ask for and accept the gift that was offered to him, was able to give as much of himself as he ever had. And then he turned and walked away for the sake of his brother, as well as, I believe, for Stephen. A sacrifice that, in the end, fate would twist into the saddest of ironies, in which Robbie’s life would be forever impacted anyway by Dusty’s love for another man, and Stephen’s would be impacted by the fact that the man whom he believed had merely suffered his love, truly did love him in return, in the only way he was able.

In a poetic prose that only served to increase the emotional quotient of this already moving story, Brandon Shire paints a picture of a disillusioned man who tries so hard to run from the truth, though he can’t run far enough to hide from who he is. It is a story of hope and despair and of the promise of love that’s discarded like the flotsam and jetsam left behind in a life laid to waste by the liars whose words have wormed their way into Dustin’s psyche until those lies became the truths he wore like scars, convincing him that love wasn’t meant for someone like him. And in an equally though altogether different tragedy, the detritus of those lies brings about the destruction of Stephen’s dreams and costs him far more than he ever imagined he’d have to pay. Listening to Dust offers no happily-ever-after to the reader. It is brutal in its honesty and keeps counsel with the reality that sometimes a moment-to-moment happiness is the best we can hope for while we navigate this mortal coil without promise of anything more than that.

I loved this book for its uncompromising portrayal of its characters and their hardships. It doesn’t pull any punches, nor does it sugarcoat its truths to make them more palatable to a wider audience. If you want your fiction tied up in a lovely bow of forever after, don’t come looking here; you won’t find it. But, I’d hate to see anyone miss out on this story for fear of shedding a few tears along the way. They’re well worth it.

You can buy Listening to Dust here: