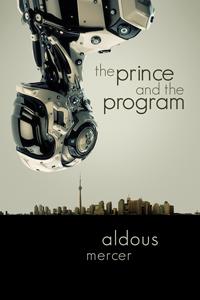 Title: The Prince and the Program

At a Glance: Impossible to define, difficult to read, but thoroughly enjoyable.

Blurb: Mordred Pendragon, the Bastard Prince, has done a Bad Thing—again. Exiled to Canada for seven years, he has to find a job to pay his bills. For reasons he refuses to reveal, Mordred decides “Software Engineer” has a nice ring to it. And though experience with “killing the Once and Future King, my father” and “that time in feudal Japan” makes for a poor résumé, he is hired by a small tech startup in Toronto.

In the midst of dealing with a crippling caffeine addiction and learning C++, Mordred thinks he has finally found someone to anchor him to the world of the living: Alan, the company’s offsite lead developer. Except that Alan might not be a “living” entity at all—he may, in fact, be the world’s first strong AI. Or a demon that mistook a Windows install for the highway to Hell. Or, just maybe, the ghost of Alan Turing, currently inhabiting a laptop.

Mordred’s attempts to figure out his love life are hampered by constant interference from the Inquisitors of the SecuritatesArcanarum, corporate espionage, real espionage, a sysadmin bent on enslaving the world, and Marketing’s demands that Mordred ship software to the Russian Federation. Then Alan gets himself kidnapped. To save him, Mordred must ally himself with the company’s CEO, who will stop at nothing to rescue her lead developer so he can get back to work. But the Prince doesn’t just want to rescue Alan, he wants a Happily Ever After—and he will travel beyond Death itself to get one.

Too bad Alan is perfectly happy as a computer.

Review: I don’t know how to define this book. It’s such a mashup of genres that SHOULDN’T work together but somehow do. That’s how talented this author is. Also, kudos to his editor for not ripping out their hair, because I don’t know how anyone could edit this without going insane.

So, as you can see by the blurb, the book has Mordred in it. As in the Mordred from Arthurian legend. But, it’s more than that. It also has a historical person in the shape of Alan Turing. What? I know, right? Who would have thought those two things would go so well together? But they do.

This book is part traditional fantasy, part urban fantasy, part science fiction, part paranormal ghost story, possibly a bit fairy tale-ish (maybe), a LOT of computer jargon, math that hurts the brain, theoretical things that hurt the brain, and I don’t even know what else.

Written in short pieces, the book can be jarring at times. I didn’t know what was happening at first, but I slowly caught on to the author’s style. Then the math and computer coding was introduced, and my brain exploded. I read and reread everything at least three times to try to understand it, but let’s not fool ourselves here. I’m a math and computer idiot, though I did try, and this book made me wish I knew what the characters were talking about.

The middle part of the book flows really well, and I was hooked into Mordred’s story as he became more comfortable in his role at EK, and with his flirtation with Alan. And then demons enter the picture, all hell breaks loose, and the style is once again jarring. Mercer rapidly switches from scene to scene to keep you thrown off. It’s hard to follow, but it’s worth it, I promise.

Not everything is revealed in this book, so you really do have to pay attention and just go with it. I’m not sure exactly what Mordred did that time in feudal Japan, I don’t know what happened to Tom and his family, and the ending of the book had me screaming, “OH MY GOD,” because I think I know what happened, but who am I kidding? I probably don’t.

Either way, what a ride!

I really want to read the next book in this series for a few reasons. First of all, I love Mordred and I want to see what happens to him. Second, I’ve been obsessed with Alan Turing for a while now, so I want to see how he’s portrayed in subsequent books. Even though this is a sci-fi/fantasy/whatever blend, the author was still—what I thought to be—true to the real man. Finally, I need to know if my thoughts on Gen-Mai at the end are correct. Maybe it won’t be revealed, but I can hope.

If you want a book that’s a challenge, check this out. But please, stick with it. I promise you, though it’s conceptually unique, it’s worth every headache.

And, if you’d like to have a discussion on Artificial Intelligence or Artificial Sentience after reading this, please, feel free to message me. In the meantime, I’ll be right here, having an existential meltdown.

You can buy The Prince and the Program here: