At a Glance: Loving this universe and eagerly looking forward to the next installment

Blurb: What does it mean to belong to someone?

Henry Blackwell is the happiest he’s ever been, and it’s all because of his companion slave Martin. Every experience, whether it be mundane or spectacular, is improved by having Martin at his side. The better Henry gets to know his slave, the deeper his feelings grow. Though the physical attraction between them is undeniable, Henry’s sure there’s more to their relationship than just sex. He can’t be certain, as it’s never happened before, but he believes he might be falling in love.

Henry’s friends are ready and willing to put their own slaves aside in favor of female companionship, and they’re beginning to wonder why Henry isn’t interested in girls. Henry only wants to be with Martin and doesn’t know how much longer he can use “late bloomer” as an excuse. The holiday season approaches, along with the promise of parties with friends and family. Henry doesn’t want to share Martin with his friends, but he doesn’t like being left out. Will he stand up for himself—and Martin—when it counts?

This is the second of four installments in the Ganymede Quartet, continuing Henry & Martin’s story from A Most Personal Property (Ganymede Quartet Book 1).

Review: A Proper Lover, the second in Darrah Glass’s Ganymede Quartet series, picks up right where A Most Personal Property left us. Henry and his companion slave, Martin, are extremely happy with each other, and life is good. Their biggest problem remains keeping their true relationship from becoming public knowledge. The intimate things they do together are definitely forbidden as far as the Master/slave relationship goes, not to mention the feelings behind their actions. Their fondness goes beyond just Henry being happy with his slave, you see, or Martin being content in his service…It seems that Henry and Martin are falling in love.

The world that Glass has built is as fascinating and detailed as ever. In this book we get to learn quite a bit more about how the slaves live and what they enjoy doing. Henry takes lunch with the Blackwell slaves one afternoon, and has a chance to hear about Timothy’s background and how he came to be Henry’s father’s companion slave later than is the norm. Henry also learns some of the slaves’ customs and superstitions, and is truly fascinated by some of their beliefs, far-fetched though they may seem.

As Martin and Henry become closer, we see a bit more possessiveness between them, and jealousy even rears its head a few times. The ‘swap parties’ the other Masters engage in with their slaves continue to be a topic of discussion – and a sore spot for Henry – and Henry must find other ways to hang out with, and bond with, his friends, as he is still adamantly against sharing Martin.

I enjoyed so many things about this book. The relationship between the boys is still so lovely and sweet, I adore their interactions. I particularly enjoyed when they talked about their future together, and the fact that Henry’s family – since it is still a foregone conclusion that Henry will have to marry and have a family at some point – will be Martin’s family also. In one discussion, Martin even says that Henry’s children will also be his children, which was so sweet since Martin obviously enjoys children very much, and is so good with them, as evidenced by his relationship with Henry’s little sister, Cora, who we see quite a bit of in this book. I absolutely love, love, love both Henry and Martin. Henry remains as unaware, and bumbling as ever; still struggling with school, and figuring out how to get out of doing things with his friends, when all he wants to do is be with Martin. But, his complete conviction that Martin is making him a better person, and his utter adoration and devotion, is fantastic.

It was also nice to see Henry’s mother’s side of the family, when the Blackwells visit them for Christmas. Henry’s beloved Uncle Reggie has returned to New York, and the whole family is thrilled to have him home. Reggie is a wonderful character. I look forward to seeing more of him in future books; I think he will be a fantastic role model and sounding board for Henry.

For all its wonderful qualities, the book felt a bit long and repetitive at times. The number of sex scenes could have been scaled back a bit, in my opinion. I mean, we KNOW that teenage boys like sex, right? Perhaps we don’t need detailed descriptions of every encounter. ;) Other scenes, such as trips to the arcade with friends, and some of the tedium of their everyday activities, also could have been reduced simply to tighten things up a bit. My only other small beef, and I’m confident that the author will come back to it in the next book, is that poor Sam – one of the other slaves – was left hanging. His situation was, I thought, a significant part of the story that was left unresolved, and undiscussed really, for the latter part of the book.

Overall, I remain completely enamored of these characters and their story. As was the case with the first book, the companion novella here, A Master’s Fidelity, is also a must read. Getting into Martin’s head, even for a brief time, is fantastic! Loving this universe and eagerly looking forward to the next installment!!

You can buy A Proper Lover here: 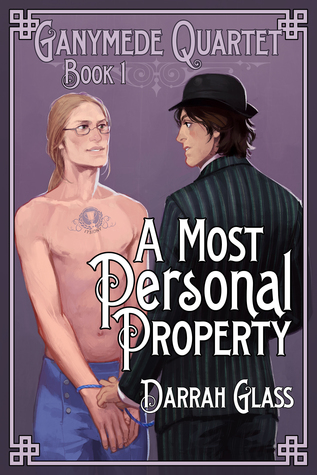 Title: A Most Personal Property

Blurb: In the heat of August 1900, Henry Blackwell—rich, handsome, and painfully shy—anticipates the purchase of his companion slave, that most personal of properties, with equal parts excitement and dread. There are limits to what a gentleman might do with his slave and still remain a gentleman, and what Henry craves goes far beyond what’s allowed. END_OF_DOCUMENT_TOKEN_TO_BE_REPLACED