First reply to this from a self-confessed gay man was that he wanted to see less “chicks with dicks” in the genre. Sigh. It’s a comment that has been uttered a million times and never ceases to make me angry. I’m going to call it out for what it is. Homophobia within the gay community. Yes, that’s right. If you feel like men who have some “feminine” traits are an insult to the community, then you are no better than the hate groups. I’ve even heard some authors speak of how this genre has been corrupted by all these feminine men…

I’ve met hundreds of gay men (and women) in my life. Most are more “feminine” than me. Now that’s not saying much ’cause I’m the least feminine woman I know. I’m also asexual, which I think gives me a different view on the whole genre. The sex between two guys thing doesn’t fascinate me as it does a lot of straight women. In fact, within this genre it has gotten really old. How many ways can butt sex be described? A blow job? A hand job? Yeah, I never understood the appeal of any of that.

See, I’m not looking for that hookup. I know a lot of readers came from erotica. They want the sex with two “stereotypical” straight men who just happened to be gay for the story. Not me. Instead, I want the dynamics of the relationship. I’m fascinated by how people just click emotionally. The physical stuff just confuses me, though I’ve had a lot of life to observe.

The men in my stories are a little more swishy, somewhat “feminine.” (I use the quotes because anyone calling someone “feminine” in this day and age is trying to insult someone and that’s just wrong. There is nothing wrong with being a woman. In fact, some of the strongest people I know are women. And being called feminine should be a trait to be admired, not scorned.) I try to represent men I’ve met throughout my life. The LGBTQA spectrum is much broader than alpha male.  Even the more “masculine” men in my stories have “feminine” traits. Like Gabe in the Dominion series who is nurturing, and Kade in Model Citizen who is looking for a relationship, not a quick fuck.

I spoke with a blogger friend this week when talking about this topic, and she said a gay friend of hers said the genre is about women fantasizing about two straight men together, not about two gay men together. I want to challenge that. I know a handful of authors who really do represent the spectrum of more than just manly men. And as a writer, I strive for that myself.

Ollie from Model Citizen is based off of model Stav Strashko in appearance, and hundreds of gay men I’ve met for personality. He’s genderfluid, demisexual, and bleeding from an emotional wound inflicted by the death of his brother. That wound is more important than how he dresses or acts. We all have our struggles. Why does identity have to be one of them? Especially in what is supposed to be our own community. I challenge the readers out there to analyze why it really is that you read the genre. Are you being supportive of real people with real struggles? Or are you just in it for the fantasy sex?

Blurb: Oliver “Ollie” Petroskovic’s life as an international supermodel was heading in the right direction. He worked part-time for his brother at his detective agency—Petroskovic Haven Investigations—and had just bought his dream house. But all that changed when he found his brother dead, a victim of PTSD-induced suicide.

Almost a year later, Ollie is trying to keep his brother’s business afloat, but can’t get his PI license. Then his brother’s best friend, Kade Alme, shows up, fresh from the battlefield after a close brush with death. Kade is looking for a new life, in more ways than one, and with PI license in hand, he’s exactly what Ollie needs to keep PHI running.

When one of Ollie’s childhood friends gets in trouble, Ollie feels he has to help. Kade insists on investigating if only to keep Ollie safe. Neither realizes the danger they’re in as someone tries to tear them apart before they can find solid ground together.

Bio: Lissa Kasey lives in St. Paul, MN, collects Asian Ball Joint Dolls who look like her characters and has three cats that enjoy waking her up an hour before her alarm every morning and sitting on her lap to help her write. When she’s not writing about boy romance she’s reading about it. 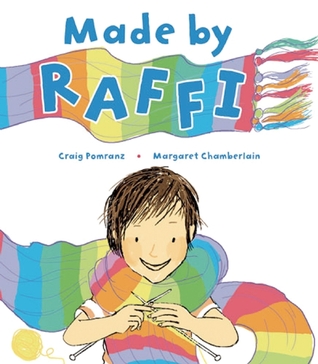 Title: Made by Raffi

Blurb: Raffi is a shy boy who doesn’t like noisy games and is often teased at school. But when he gets the idea of making a scarf for his dad’s birthday, he is full of enthusiasm even though the other children think it is girly to knit. Then the day draws near for the school pageant, and there is one big problem: no costume for the prince. And that’s when Raffi has his most brilliant idea of all — to make a prince’s cape. On the day of the pageant, Raffi’s cape is the star of the show. END_OF_DOCUMENT_TOKEN_TO_BE_REPLACED