How the anthology came about: Piper Vaughn, who lives in Chicago, had the idea for a fundraiser anthology where all the royalties would go to Project Fierce. Less Than Three Press agreed to publish it and donate all of their proceeds as well. The Call for Submissions went up, and twenty stories will be winging their way to readers in two more days. :) END_OF_DOCUMENT_TOKEN_TO_BE_REPLACED 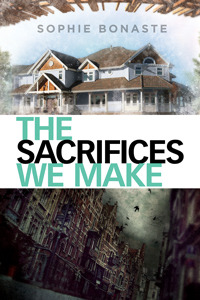 Hello everyone! My name is Sophie Bonaste and I am doing a post here at the fabulous Novel Approach to help promote my debut novel The Sacrifices We Make. You can find all of the necessary links for the novel and other fun stuff at the end of the post. And, of course, before I go any farther, I want to thank Lisa for having me here today.

Today, I am going to talk about one of the more depressing topics in my book. Why? Because it’s also the most important. In my novel, Mickey is a homeless seventeen-year old, who was thrown out of his childhood home because of his sexual orientation. Because the book is meant for a YA audience, I purposefully toned down the severity of the situation. Not because it’s not important, but because I wanted the story to have an underlying sense of hope. However, my story is just that: a story. LGBT homelessness is a real problem plaguing this nation and it’s something that needs to be talked about.

Out of all the teens who live on the street, about 40% of them are part of the LGBT community. 40%! That is a staggeringly high number considering only 10% of all youth in this country identify as LGBT. The number one cause for this is family rejection. I know that many of us have heard the heartbreaking stories about how parents would rather toss their child out on the streets to fend for themselves than accepting who they are, but it’s no less sickening.

As if getting tossed out of your home wasn’t enough, LGBT youth often have to face more challenges than heterosexual teens. LGBT teens are much more likely to be sexually or physically assaulted, have mental health disorders and/or turn to drugs than their heterosexual counterparts. Upwards of one-third of these children have been victims of hate crimes. And, according to StandUp For Kids, the LGBT youth homeless suicide rate is at 62%.

Now I know that’s a lot of statistics, but let’s really think about the numbers for a second. The estimated number for all homeless youth is 1.7 million. Using that number, 680,000 LGBT youth are on the street. That’s more than the entire population of Washington D.C. And if the suicide rate is correct, 421,600 of these youth will commit suicide.

Why is the situation so bleak? Well, there are a few reasons. The first is purely a lack of funding. There is very little money at any level (federal, state, or local) helping to fight homelessness of any kind. Bigotry is also still an issue after children have gotten kicked out of their homes. One-third of homeless teens report having been denied shelter because of their orientation. Thankfully, more LGBT-friendly shelters are coming into existence, but there are nowhere near enough to meet demand. Once children are homeless, they can turn to drugs and prostitution, which makes it even harder to get off the streets. Suicide is the only option many of these youth see to escape the pain.
So what can you do to help?

Well, the best way is to donate time and money to the cause. There are lots of shelters out there in need of funding from private donors, because there is no government help. Some examples of shelters are the Ali Forney Center in NYC and the LA Gay and Lesbian Center. There are also lots of projects dedicated to starting more shelters, such as Project Fierce out of Chicago. You can find a shelter near you to support using any search engine.

There are so many things we can do to reach out and help these children, but we all have to work together to create safe places for these youth to go to.

Okay. So I think I’ve covered everything. I know this is a really heavy topic, so for sticking with me, I would like to offer one free e-book of my debut novel The Sacrifices We Make. The details are below. If you would like more information about the book, you can go to Dreamspinner Press or my own blog. Thank you very much for spending time with me today and GOOD LUCK on the giveaway!