“In this world, it is too common for people to search for someone to lose themselves in. But I am already lost. I will look for someone to find myself in.” – C. Joy Bell C. 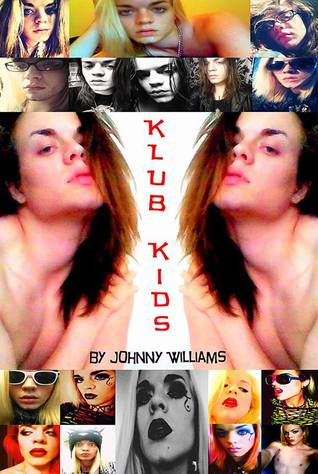 Blurb: In one fall/winter season in the clubs of NYC, a lost soul parties with friends while looking for gay love. “Do you think that punk’s dick hair is blue too?” Packed with humor, candor and sex, Klub Kids takes readers on a ride as they join Johnny Williams and his friends on their clubbing quests to find love and the music to dance and dance and dance their butts off in this fictionalized fun read.
END_OF_DOCUMENT_TOKEN_TO_BE_REPLACED

I’m basically a shy person, so this part kills me. Lol. I learned at an early age to cover my shyness with something. At first, it was hiding in shadows, dressing in black, slipping on the leather and kind of using it in my mind as a second skin. But people kept laughing at anything I piped in about, from across the room in those shadows. I realized they weren’t laughing at me, but at what I said. Surprised me to hell. I noticed people started to listen when I piped up too, so they didn’t miss my snarky crap. I wasn’t trying to be funny either, but just commenting whenever I felt something needed to be said. Or it felt like a comment bubbled up and just had to be heard.

Growing up, I didn’t have many friends. I knew I was gay when I was younger than 12, but realized I didn’t have many friends about then. Nobody wanted to be labeled gay, I guess also, so people avoided me. I grew to searching out on TV movies, certain stars that could make me laugh. I was drawn to old comedy teams, British sitcoms, and sarcastic characters in these. Sure, the slapstick made me giggle, but Groucho, W.C. Fields, etc… always had a comment, a sling to be slung out, a verbal wisecrack at hand for when they were attacked. I admired that. Somehow, my personality absorbed it. I knew I couldn’t fight. I was short, not strong, and not macho at all. A teacher once told me after being hit for being too sissyish, “Run faster.” Thanks. Lol. Somehow jokes started slipping out when I was being hit. One bully actually laughed at some, and kind of stopped picking on me. Thought I was funny. Eh, see? Some TV ain’t bad for you.

I tried standup until I was told to sit down. Did improv but couldn’t remember the lines. [Actually did do both, and fell off the stage doing standup. Lol. But, can’t tell you the full story. That’s in the sequel. ^_^ ]

I’ve had a crazy life, and it is not over yet. Still know the people in the book, and still go out. But, my stories about all that has happened to me usually had my friends laughing a lot, to the point most started telling me, “You should put these into a book!!!”

Thus Klub Kids was born. It will be a three part series. It’s based on my life in the clubs with my friends, as we romp through NYC and lots of clubs together, looking for love. I’m a gay, club-hopping guy that wants nothing more than to find another sweet, cute, androgynous, gay guy to love forever, hoping for a soul mate connection, in a place that most people are just looking for hook-ups and other quick, superficial relationships. It’s semi autobiographical. And the names have been changed to protect the guilty. Heh

Danny is my best friend, rich, funny and way too attractive for my own good. Jason is my bubbly li’l pixie punk friend, so filled with joy and fairy gayness he just can’t keep it to himself, despite all of our pleas. And Brendon is my goth/emo standoffish, brooding friend who likes to think he’s more scene than he may actually be. Deep down, though, he does have a good heart. Somewhere.

In one fall/winter season in the clubs of NYC, a lost soul parties with friends while looking for gay love. “Do you think that punk’s dick hair is blue too?” Packed with humor, candor and sex, Klub Kids takes readers on a ride as they join Johnny Williams and his friends on their clubbing quests to find love and the music to dance and dance and dance their butts off in this fictionalized fun read.

Hi, everyone, I hope you’ve all had a great week, and are looking forward to good things in the week to come.

Speaking of great weeks, we’ve got one coming up here at TNA: guest authors, blog tours, giveaways, and, of course, lots of reviews. Here’s a look at who and what’s on tap for the week ahead:

Monday – Cate Ashwood and Skylar M. Cates make The Novel Approach a stop on their Five Ways a Boy Can Break Your Heart Blog Tour, with an article about and exclusive excerpt from the book, and there’ll be a giveway.

Tuesday – Algenon Lusch stops by on his Seeing DOUBLE Blog Tour, and he’ll be offering a giveaway of the book.

Brita Addams is also here for her monthly visit, with an article that’s near and dear to my heart.

Wednesday – Rhys Ford pops back in on the Clockwork Tangerine Blog Tour, and ::bad pun warning:: gears up for a great and totally unique giveaway.

Thursday – Indra Vaughn stops in today on The House on Hancock Hill Blog Tour, and she’s offering a giveaway of the book.

Friday – Jaime Reese drops by on the A Better Man Blog Tour and will be offering a giveaway of the book.

Jess Faraday will also be our guest today on her Turnbull House Blog Tour, and she’ll be giving away the two book set of the series, The Affair of the Porcelain Dog and Turnbull House, either Print or E-book (reader’s choice), to one winner.

Saturday – Author Johnny Williams dances his way to TNA to introduce his new book, Klub Kids, and give away an e-copy.

Sunday – To round out the week, A.F. Henley flies by on the Second Star to the Right Blog Tour, with an interview and a chance for one lucky reader to win an e-copy of the book.