Cheers, everyone, and thanks for coming by to see what we have in store for you in the week ahead. It’s shaped up to be another busy one–loads of guest authors, blog tours, giveaways just for you, and, of course, books. It wouldn’t be a week if we didn’t talk about books.

Tuesday – We’re helping Jaime Reese celebrate the release of the newest addition to the Men of Halfway House series, A Restored Man

We’ll also be helping to reveal the cover for Lou Sylvre’s A Shot of J&B, the next generation in the Vasquez and James series

Thursday – Jay Northcote drops in on the Passing Through blog tour

Jessie G. will also be with us today on The Protector blog tour

We’ll also welcome Riptide Publishing and Cari Z., a contributing author in the Rules to Live By anthology

Saturday – Finally, to close out this busy week, we’ll have author Lillian Francis on the Theory Unproven blog tour

And that does it for us for this week. Until next time, happy reading! 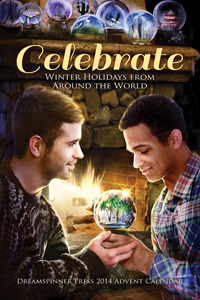 Short stories are hard to write—and review. I love them, personally, but it does take a special type of author to get them correct, in my opinion. I think Stephen King said it best, and I am paraphrasing here, Short stories are like kisses from strangers in the dark. And they are, you never know if you are going to enjoy that stolen kiss or not. I’m adventurous and I usually do like that caress, and tend to go seeking out more than just kisses as well. **g**

That said, here are four stories from the Dreamspinner Press 2014 Advent Calender package “Celebrate!” This package contains 31 stories total, with a recurrent theme throughout of the holiday season away from home.

Blurb: George is an anxious, neurotic mess. The only thing that calms him is his partner of ten years, Scott. So despite how nervous it makes George to travel alone, he decides to go to Europe, where Scott has been working for two months, to visit for Christmas. George plans a day on his own in London before traveling to Paris, where Scott is staying. But on George’s day of sightseeing and shopping, everything goes wrong, from a misunderstanding with the hotel concierge to getting lost in Harrods. All George wants is to be with his partner for Christmas, but he’s not sure he’ll survive long enough for that to happen.

Review: I did enjoy this one, but  the story fell a bit short, I think. It was sweet and had a Christmassy feel, but there was just something lacking. I’m not certain what it was. It could have just been me. Regardless, I felt bad for George. EVERYONE was so rude to him. His plans fell through, and he was trapped in a strange city with nowhere to go. He, and the writing, tended to ramble on in overlong sentences, and I kinda wanted to tell him to get over himself. If you can fly halfway round the world for your lover, you can overcome anything. Scott, though, is George’s rock, and sets everything to rights by coming to his rescue. He doesn’t actually show up, but manages to calm George down long enough to give him proper directions to carry on with his trip, where we finally get to meet Scott.

The ending makes up for George’s horrible experience, with a sweeter than sweet romantic proposal at the top of the Eiffel Tower after they spend the day together. Overall, I liked the author’s writing and will probably seek out more of his work. 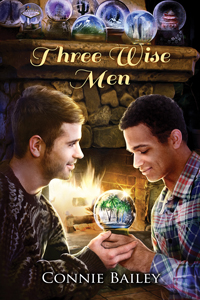 Review: I didn’t really like this one; however, the writing was not terrible. The story was rough and felt like a beginning even though it ended, if that makes any sort of sense. It was over before I could even get involved with any of the characters, and I kinda felt like I had missed something entirely. Especially since this was rooted largely in Korean traditions, which, I gathered from the story, aren’t exactly homosexual friendly. It wasn’t really touched on, though, just kinda glossed over that they had a duty to family and couldn’t have their triad.

Basically, I think it was too short for the themes visited, and confusing to boot. It isn’t until after the three men are together again that you realize the threesome was aborted. In fact, it is revealed that only two of the three slept together, and one got completely left out. Horrible, really, and yet, ten years after the fact, the one left out, Joon, is still in love with the other two. It also seemed to me that Joon was just there as a connecting piece because the real chemistry was between Tae and Sangsun, the two that actually had sex.

Ten years is a long time, in my opinion, and people change. Tae certainly did despite sometimes indulging in men, but Sangsun was in the firm no-never-happened-never-will-again camp. Poor Joon was just left on the sideline, still, and a virgin after ten years.  It was also confusing because suddenly they were all closeted, two of them refusing to change, then bam! we had an orgy on our hands and all promised to make a change so they could be together in their triad. Talk about tale spin. I hate to say it, but I probably won’t seek out any more stories by this author.

Title: Second Bite of the Cherry

Blurb: When Daniel Berrisford reluctantly agrees to accompany his best friend Kate to the New Year’s Eve celebrations in London, he doesn’t expect to enjoy himself. Daniel is pleasantly surprised to see his first boyfriend, James Allison, among the merrymakers. The pair haven’t seen each other for four years, but as they talk and midnight approaches, it becomes clear the spark between them is still there. The New Year is a time for new beginnings, and for Daniel and James, it might be the time to give love another chance.

Review: This story I enjoyed in spite of the cutesy nicknames. That’s a pet peeve of mine in particular, so ignore my idiosyncrasies. There was background and while it was short on details, you could almost feel the chemistry between Daniel and James. It was a mature look at a second chance romance between two people who thought they might have had a connection but realized they were too young to do so. And really I think that’s a smart thing. A little pining is revealed when our couple take a break from the New Year’s celebrations, and it shows that in spite of being mature when they were young, it was also a learning experience for both of them. They found themselves and found one another again and decided to make a go of it. A perfectly serviceable and amicable read. I really enjoyed this author’s writing and pacing and will most likely seek out more by her.

Blurb: Duncan is an ocean from home over the holidays and expects to spend them alone. To his pleasant surprise, one of his European co-workers, Georg, befriends him and includes Duncan in the holiday traditions of his homeland: cutting a Christmas tree under starry skies at Georg’s country estate, decorating it at the family’s city home, and shopping at the Christmas market in Munich. Both men are lonely and realize they have much in common. But Georg’s life is in Germany and Duncan’s is in Boston. With the project they’re working on nearing completion, any chance for more than a holiday fling seems as elusive as stardust.

Review: This is how you do a short story. This story is truly a wonderful Advent gift. Grey is new to me and after this introduction, I will definitely be seeking more works by him.

Amazing detail and plot without being overly dramatic, Stardust is a sweet tale of romance and finding your place. I don’t even care that the happily ever after never occurs because Duncan and Georg were fully realized, and there was the hope of them making it in spite of their long distance relationship plans.

This was the first of the Advent stories I read that didn’t leave me feeling as if the setting was just another plot device. The holiday, the Germanic traditions, and the characters were amazing in their completion and detailing. I wanted more of the story at the ending of the book, but I was just so satisfied with how Grey ended everything; once again, it didn’t matter the bow wasn’t on this fantastic gift of a story.

Blurb: Two competing gangs of car and drag racing enthusiasts with a shared history of pain and rivalry leading to outright hatred. Two men from opposite sides of the tracks, yet with more in common than they’d like to admit.

Paul Appleton is a troubled man who has never been in a relationship, having lost everyone he cared for in his life. His mother died when he was very young and subsequently, he lost his brother and his best friend. Now Paul is convinced love will always end in tears. END_OF_DOCUMENT_TOKEN_TO_BE_REPLACED