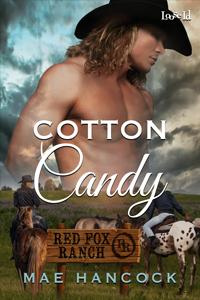 At a Glance: This one just didn’t do it for me.

Blurb: Cowboy Cotton Reid is the laid-back type of guy who accepts people as they are, no matter how flawed. People think he’s fun, honest and crazy about his boss and friend the sexy rancher Bay Redman.

Living with Obsessive Compulsive Disorder (OCD) is something that family man Bay has done his whole life. Bay can be like a bear with a sore head if the hay isn’t stored symmetrically or his fridge contains an odd number of jars.

When the two men begin a hot affair, Cotton keeps an important secret from Bay. If he can’t find the courage to tell him the truth before someone else does, Bay may never be able to let it go.

Review: Cotton Reid fell in love with his boss—but the man is more than his boss, he is the father figure for Cotton’s daughter Kristen.

Cotton is very laid back, on the outside. On the inside, the man is just full of angst, and it colors everything he does in his job as ranch hand. He is young, he is a father, and he comes to the ranch to meet his daughter and be a part of her life. And remains there for eighteen months, doing nothing about it, before the events of this book take place. Have to admit, I had some trouble with that one, but once the author explained why, it made sense. I still may not have agreed with it, but I had a clearer view of where the author was going. Cotton is a confused character on the inside, and many of Bay’s personality traits appeal to this cowboy who needs help in an overwhelming situation. Cotton is a loving character, he wants to care for Bay and be everything the rancher needs, and in this respect the author hits it spot on.  I rooted for Cotton, he just needed the support.

Bay is a successful rancher and businessman.  If his personal life is not as together as his work one, well he’ll take what he can get.  Bay also has OCD. I really applaud the author for how she treats this disorder in her character.  The way that Bay copes – or doesn’t cope – with the OCD is addressed in compassionate and believable scenarios. Bay becomes an unlikely hero in this story, as his life trauma makes his disorder worse, to the point of taking over, and how he copes with this unique malady and moves forward with his life is admirable. Control over everything is how Bay keeps sane. This seeps into his relationship with Cotton, and Bay’s commanding persona in the bedroom is the perfect complement to Cotton’s submissive heart. But Bay is broken and he needs Cotton to help him heal. As the events in his life swirl out of control, the only peace Bay can find from his OCD is in the calm that Cotton brings whenever Bay is around him.

I have to say, I disliked the secondary figures in the story.  The daughter, Kristen, was spoiled and ungrateful, and her behavior kept getting justified to the point of Bay apologizing to his daughter for the way SHE acted.  Uhm. No. And the ex-wife was horrendous, but then, she was supposed to be, so excellent writing there! Grandma was a mixed bag for me; she was supportive of Bay’s relationships but felt that he could do more to control his disorder. Which, if you have OCD you know that may not be true.

There is a lot of angst flying around in this book, and for that it was a mixed bag for me.  The book is compelling; it is worth the read for those who love cowboys with issues.  This is book two in this series, and I will probably read the next installment just to see where the author will go next with this ranch.

I loved the cover art on this book, done by Dar Albert. The depiction of Cotton was exactly as I pictured him! Thank you for an amazing visual that enhances the story.

You can buy Cotton Candy here:

At a Glance: Given cleaner editing and stronger plot development, Enticing Hart really could have been a great novel.

Blurb: Hart Emile is tired of cruising for guys, living a soulless existence. He needs a change; so when an acquaintance gives him the number of the gay friendly Red Fox Ranch that’s hiring for staff, he heads south.

Oak Redman is eighteen years old and desperate to explore his awakening sexuality. The moment Hart lays eyes on the handsome young rancher he’s smitten. Not only is Oak hot, spirited and very persistent, he is also the ranch boss’s son and strictly off limits. Hart tries to fight his feelings and to respect his boss and the family who quickly become dear to him, but after Oak’s Grandma suggests he gets with Oak he can’t deny himself the most exciting and enticing man he has ever met.

Hart’s not the only man to have noticed how sweet and charming Oak Redman is. A family friend, Steve, is also anxious to have the affections of the young rancher. Can Hart work out Steve’s dark secrets before it’s too late and keep his job, his lover and his life?

Review: Hart learns about the Red Fox Ranch from a casual pick up he meets in order to satisfy an itch that is getting tougher and tougher to satisfy. He wants to settle down, meet a man and maybe try his hand at a long-term relationship for the first time in his life. When the stranger mentions the ranch is not only hiring but is gay friendly, Hart sets out to land himself a job. Little does he know the owner, Bay, is grappling with a near socially crippling form of OCD that is steadily growing worse, but he has rigid rule when it comes to behavior at the ranch. Those rules include hands off his attractive and only son, Oak. Could Hart’s chance at both a job and happiness be ruined from the start? For, you see, he finds himself immediately attracted to Oak, who returns his attentions and then some.

Enticing Hart by new author, Mae Hancock, is a good story badly in need of another round of edits in order to make it a better one. While I have no problem with the insta-love trope, it suffered in this novel due to the immediacy of Hart and Oak’s attraction and some confusing elements in the story. First there was a continual referral to how long Hart had been at the ranch. Was it weeks, days, hours? All I know is that these two were in insta-lust within hours of Hart’s arrival. Then, there was the age issue. At first, Oak is “nearly nineteen” and confesses to his friend Steve that he had encounters with men in college. Yet, almost immediately after, he is only seen as barely eighteen, a virgin, and college is never mentioned again. Next there is the discrepancy with his dad, Bay, and his exact age. Again, initially, Hart guesses the man is 35 but hastens in his mind to add “a few years” in order to justify him having an 18 year-old son. But later, Bay is said to be 36, making him 17 when he married. Again, this age thing is never brought up again, so we never know exactly how old he is and because it was pointed up in the story at the onset, it became an annoying little detail that was left dangling.

I try not to nitpick when reading a story, particularly one written by a new author, but I feel this one was so poorly edited her book suffered as a result. If you mention the use of condoms deliberately every time Hart and Oak have sex, then you really need to address that they are disposed of at some point after sex. Also, condom use means that Oak could not feel Hart “filling” him up with his come. Then there were occasions where names got switched around and Hart was feeling himself take…himself. Incident after incident like this arose until I found myself rereading passages to make sense of what had just happened in the scene. I was really worried until we got to the last third of the novel, and then I suddenly began to see the makings of a really good story.

Once Steve, Oak’s friend, was introduced you got the feeling something was just a little off with him. In the latter part of this novel, that suspicion comes to fruition, and the novel takes a decided turn from a flawed and just mediocre read to an exciting and captivating story. Here was a true glimpse at what Mae Hancock was capable of writing. It was well written, exciting, fast paced and gave the story a bit of a nail biting twist. And it was this section that would make me want to check out this author’s next piece of work.

I believe Mae Hancock has real potential to become an exciting new voice in the m/m genre. Given cleaner editing and stronger plot development, Enticing Hart really could have been a great novel. I look forward to reading more by this author as she grows and develops into her craft.

You can buy Enticing Hart here: