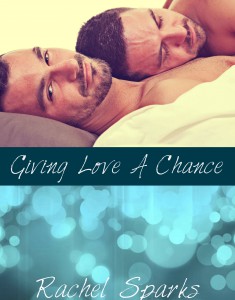 Today we’re pleased to welcome author Rachel Sparks to The Novel Approach, on the tour for her new novel Give Love a Chance. Enjoy Rachel’s guest post, then be sure to click on the Rafflecopter widget below to enter for the chance to win an e-copy of the book.

I want to take this opportunity to tell why I wrote Giving Love A Chance.

Two and half years does not seem that long. For me it was a lifetime. Between the ages of 19 and 22, I was in an abusive marriage. I was abused physically, mentally, emotionally and sexually. I was raped and my son was conceived from that rape.

I was not able to tell my story until now. I want people to see and understand abuse from the survivor’s point of view. Yes, I mean survivor; we are not victims. Writing this book became a therapeutic endeavor for me; and part of the healing process was using my name for one of the characters. I hope this book helps people to understand how an abuser works.

As a survivor I can tell you that ignoring the words spoken around me can be a very hard thing to do. The ones that hurt the most are when people say things like “why don’t they leave? They could just walk away…” or “I’d never be in a relationship like that…”  Until someone has been in a relationship that becomes abusive most people do not understand the complexities of it.

That finding the strength to walk away does not mean that the survivor is okay. I wanted my readers to grasp the fact that survivors are much like soldiers or police or firemen or nurses or car accident victims… or anyone that has gone thru traumatic or violent events.

Survivors have triggers. Words, actions, smells, places… they all act as triggers that can cause a flight or fight response. For someone to trust again… to find someone to love… to open themselves up to the possibility of being hurt again takes a giant leap of faith.  They have already been in one relationship where their trust in humanity has been violated. “Giving Love A Chance” tells the story of one man and his struggle to find the faith to trust not only a potential life partner but himself. While every relationship is unique, those that have survived an abusive relationship will find elements that resonate with them. For those survivors… I wanted you to know you are not alone. That somebody understands. I wanted to tell my story.

Please remember as you read this book that a person in a domestic abusive marriage or relationship still loves that person. The abuser gets into the person’s head and they can convince them to do things they normally wouldn’t do. What might seem abnormal to you is normal to them.

If you are in an abusive relationship, you are not alone…there is a way out.

Blurb: The perfect life was just a lie…

John Burrows had a wonderful husband who loved him. The job of his dreams. He had a loving family, loyal friends and adoring fans. His life was everything a man could hope for until it fell apart. Society says it does not happen, that it is all a lie, so John hid the truth from everyone until it was almost too late.

The truth was revealed…

Ben Tensley thought that meeting your soulmate on the most traumatic night of his life was hard. He discovered that watching the man you love try and heal in the middle of chaos was even harder. Ben and John struggle to find solid ground…until John’s nightmare returns.

Will John be strong enough to give love a chance?

Excerpt: John looked down at their hands and then laced his fingers with Ben’s.

Ben placed his hand lightly on John’s check. He stared deeply into John’s eyes. Ben could see the pain no matter how hard John tried to hide it. “Are you going to let me in John?”

John swallowed and licked his lips.

Ben leaned in closer and closer to John. He was so close that John could feel the hot breath against his lips. He closed his eyes as he felt Ben press his mouth firmly, offering no resistance. He let Ben explore the depths of his mouth with his tongue. Ben knew this was more than just a connection. This was what he had been yearning for all these years. John was exactly what he needed.

John put his hands on Ben’s chest and pushed him away. He could feel his heart pounding and hear it in his ears. “Wait… stop… please.”

Ben raised his hands and moved back. “I’m sorry, I thought you…”

John got up and walked over and placed his hands on a nearby table with his head down. He was trying to calm down. He felt fear gripping him.

Ben got up and walked over to the table. “Hey…”

John stood up. “Could you just back up please? I need some breathing room.”

Ben raised his hands and backed up. “I’m sorry.” Ben could have kicked himself. He had taken it too far and he knew it. At this rate he would never have a chance for a relationship with John.

John picked up a bottle of wine and poured himself a glass. He drained the entire glass in a matter of minutes.

John ignored Ben and filled his glass again, draining it quickly before slamming it on the table. “Hell no! I just need some space dammit!”

Ben walked around the table and took the wine bottle. “Look, I’m not going to stand here watch you drink an entire bottle of wine and cuss me out.”

John tried to reach for his wine bottle. “Then leave!”

Ben wouldn’t let him have the wine bottle. “I am not going to let you start drinking when you feel nervous around me. I’m not going to rape you. You wanted me to stop, and I did.”

John was curling his hands into fists.

BIO: Rachel Sparks grew up in South Carolina. With a degree in Early Childhood education and one in social work, she brings those skills to the table to write stories involving current social issues, a sprinkling of romance and powerful story lines.

Hi, fellow book hoarders, and welcome to another sneak peek at what we have in store for you in the week ahead, as I’m feverishly preparing for the trip to San Diego and GayRomLit 2015. I hope to see so many of you there. And I hope you’ll stop me and say hello. We’ll have coffee and chat books. :-D

We’ll also have author Hayden Thorne with us today to chat about the final book in the Masks series, The Porcelain Carnival

Tuesday – Today begins with Rick R. Reed when he stops by to talk a bit about the re-release of his book Tricks

We’ll also have author Charlie Cochrane with us on the tour for the latest book in the Cambridge Mysteries series, Lessons for Sleeping Dogs

Friday – Finally, to close out the week, we’ll have author Silvia Violet joining us on the tour for her newest novel Unexpected Engagement

And Perie Wolford will be joining us as well, on the tour for his new book Lights

And that does it for another week. Until next time, happy reading! 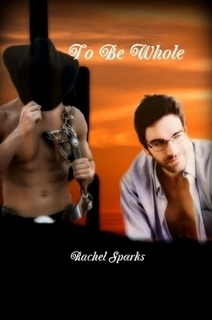 TNA: Hi, Rachel, thanks so much for being here with us today. Let’s begin by having you tell us a little bit about yourself.

Rachel: I’m from South Carolina. I live in South Carolina with my son Matt, daughter-in-law Brittany, who does my book covers, and my orange tabby cat Little Hoss. I’m a huge Doctor Who fan. David Tennant and Matt Smith are my favorites. I have a portrait tattoo of Matt Smith on my leg and plan to get David Tennant and the Tardis on the same leg soon. I have been a published author for 10 years. I have always said I have millions of stories and characters running around in my head.

TNA: To Be Whole is your first gay romance novel. What was it about this book and these characters that led you to the genre and to this point?

Rachel: Every author has a story that dying to be heard. This story has been in my mind and heart for some time. I finally decided it was time that it was heard. Love is love and nobody has the right to say a person cannot love whom they are destined to love. END_OF_DOCUMENT_TOKEN_TO_BE_REPLACED

Hi, everyone , and welcome back. Thanks so much for stopping by to see what we have in store for the week ahead.

We have the pleasure of not only bringing you more reviews, but we’ve also got cover reveals, blog tours, interviews, and giveaways coming up just for you.

SJD Peterson brings the Splintered Blog Tour to The Novel Approach, with a Giveaway

Then Heidi Cullinan makes a stop at TNA on the Fever Pitch Blog Tour, with a Giveaway

Finally, we have the honor of bringing you the Edmond Manning Butterfly King Blog Tour

Thursday – K.C. Burn is our guest today on the Countdown to Coastal Magic Blog Tour

Saturday – Rachel Sparks is our guest today on the To Be Whole Blog Tour, with a Giveaway

Sunday – And closing out the week, we’ve got Margie Church with us on her The Camera Never Lies Blog Tour, with a Giveaway