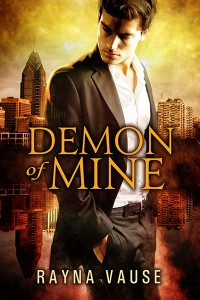 Today we’re so pleased to welcome Rayna Vause to The Novel Approach to chat a bit about the world and characters she’s created in her new novel Demon of Mine. Enjoy Rayna’s guest post, then be sure to click on the Rafflecopter widget below for the chance to win a $20 Amazon Gift Card.

I’d like to thank everyone at The Novel Approach for having me here today to talk a bit about my book, Demon of Mine.

Have you ever seen the movie Michael with John Travolta? It’s the one where he plays an angel and when he doesn’t live up to people’s expectations, he responds by saying, “I’m not that kind of angel.” That phrase played a big part in the creation of the demons in the world of Demon of Mine. I didn’t want your typical demons that are all evil all the time. I wanted a race of demons that really ran the gambit, from the truly evil to the anti-demon. For example, there’s Serena, the head of Zavier’s department. She is 100% cold hearted. She doesn’t care who she has to use or step on to achieve her goals and aspirations. And, lord help whoever gets in her way. Then there is Leland. He’s the President of Corporate South and while he’s done his fair share of bad things, and no matter how high he’s climbed on the corporate ladder, there is still an underlying core of goodness to him. Finally, there is Zavier, one of the principle characters of the book. He’s the anti-demon. He’s grumpy and miserable, but deep down a good guy. He collects souls because that is his job, after all. But he looks for loopholes for those whose wishes are truly selfless. Regardless of where they fall on the demon spectrum, at the end of the day all of them have very human qualities, be they positive or negative.

To quote Zavier, “This is demonology 2.0, the upgraded edition. We’ve phased out a lot of that old school, bodily fluids stuff.” In Demon of Mine, Hell has gone corporate. They’ve replaced blood rituals with contracts signed in triplicate. They’ve downplayed all of the fire and brimstone aspects of their world, shrouding it in double speak and professional gloss. The world of demons has been loaded down with policy, procedures, and business suits. One fun thing I added to make the demon universe unique are cellphone with the ability to teleport. In fact, both angels and demons travel by teleportation, with their phone acting as their personal portal.

In creating Demon of Mine, I largely turned the mythos of heaven and hell on it’s ear. I hope readers have as much fun reading about the world as I did writing it.

Climbing the corporate ladder can be hell….

As a Collections Demon, Zavier grants his “clients” one wish in exchange for their souls. His job sucks, but once you make a deal with Corporate South, they own you. The trouble is, Zavier’s not a very good Collections Demon, with his tendencies to spurn authority and find loopholes to help deserving clients out of their contracts. He’s under scrutiny from the head of his department, who would quite literally like to see him burn. He just needs to close a simple deal to get upper management off his back. Instead, he meets Ryan.

Ryan is desperately searching for a way to save his dying sister. He doesn’t believe in magic and demons, but he’s out of options. Zavier’s not what he expects in a demon, and even more unexpected is the strong sense of familiarity—very intimate familiarity.

While trying to free Ryan from his contract, Zavier discovers secrets unscrupulous even by South standards. Exposing them could cost Zavier everything, but it might be Ryan’s only hope.

About Rayna Vause: Rayna Vause loves to craft romances that mix a little action, a little adventure, and, often, a touch of the paranormal. She’s voracious reader and a perpetual student. Rayna has collected more degrees and certifications then she cares to admit and eventually she’ll probably earn a few more just because. She is a proud geek who injects a little bit of her geeky, tech obsessed soul into every story she writes.

When Rayna isn’t busy make up stories, she’s likely indulging her love of video games. Why? Because playing through the action, adventure, and romance in a role playing game is as good as reading a romance novel and is sometimes great inspiration for her writing. She’s a martial artist having studied American Kenpo Karate. She is also a Disney fanatic of epic proportions.

Rayna is a member of RWA, RRW, and a founding member of Liberty States Fiction Writers. She lives in southern NJ, just a bit outside of Philadelphia and shares a home with a cat who thinks she’s royalty.

Welcome, friends, and many thanks for stopping by to see what we have in store for you in the week ahead!

We’ve got such a fun-filled and busy week in store for you that I’ve had to open up my calendar on Saturday and Sunday just to bring it all to you, and I’m happy to do it too.

Here’s what we have on tap:

Monday – Kicking off our week, we have Marie Sexton as our guest today to help us celebrate the countdown to GayRomLit 2015

Joining Marie will be author Hayden Thorne, doing a little bit of her own celebrating of the release of her YA Historical Fantasy novel Desmond and Garrick (Book Two)

Tuesday – We have another two fabulous authors with us today. First up is Mickie B. Ashling to chat a bit about her new novel Forged in Trust

Wednesday – Today we have author and editor Denise Wyant with us today to share an excerpt from the just recently released anthology Apple Bites, a blend of M/M and M/F shorts, ranging from sweet to spicy

We also have another edition of “Genre Talk” with Carole Cummings coming up today, featuring Luchia Dertien in the spotlight

Friday – And starting a busy day today, we’ll have author Rhys Ford with us to do a little celebrating of her own, for the release of Sloe Ride, Quinn Morgan and Rafe Andrade’s story in the Sinner’s Gin series

Sunday – Author T.M. Smith closes out our week on the tour for her new book Fame and Fortune

And that does it for this week. Until next time, happy reading!