At a Glance: This is a poignant tale of love and loss and love again – beautiful and lyrical and at times, heartbreaking. It grabs the reader and doesn’t let go until the final sentence.

Blurb: Shawn Tillerman thinks he’s losing his mind. Wary and damaged after a hard life filled with broken promises, he’s been having dissociative episodes for the past few months. Flashes of different lives he didn’t live. Walking in the footsteps of men he knows he never was. In these waking dreams, he’s always with a lover, but he can’t see the man’s face and doesn’t know his name. Though the episodes are becoming more frequent, he hasn’t told anyone what’s happening to him. He’s too busy taking care of his twin sister and keeping her away from Oxy. If he can sell the house he’s inherited from a distant relative, he’ll finally have enough money to put her in a good rehab center. He can turn their lives around.

Or not. Because Raleigh, the compelling stranger who wants to buy their house, swears that Shawn isn’t experiencing psychotic episodes, but is reliving memories. That he and Shawn have come together in life after life and time after time.That he is the man from Shawn’s dreams, and has been searching everywhere for him. Even if Shawn remembers nothing, Raleigh remembers it all, and he isn’t going to give up now.

Shawn doesn’t believe Raleigh–but he’s beginning to wish he could. What if it is true, after all? What if saying goodbye to all he thought he was sure of is only the first part of hello?

Review: The First Hello is a really beautiful story that is just so well written that is best experienced by reading. You can see from the blurb that this is a tale of an endless love, but it’s so much more than that.

Raleigh and Shawn meet and while Raleigh always seems to be holding something back, Shawn always seems to be unable to grasp something just out of reach. They are at the opposite ends of a tug a war, and the rope is their sanity and possibly, their very existence. Shawn thinks he’s losing his mind and Raleigh thinks Shawn’s being willfully obstinate.

As they dance around one another, Shawn is extremely fearful that if he gives in to his attraction to Raleigh, something awful will happen – that his mind will truly shatter. He’s trying to hold on to something that he can’t even define. He’s worried about his sister, who has a drug problem, and he’s trying to keep it together long enough to get her the help she needs.

Raleigh tries to be patient, but he’s terribly worried that Shawn is not even taking care of his own basic needs. He does his best to try to help without overstepping, but Shawn is proud and doesn’t want to accept his help. Shawn feels a constant pull towards Raleigh, but he’s convinced it will literally lead to his ruin. Shawn hasn’t had an easy moment in this life, and he really is just hanging on by a thread – a thread that could easily snap at any moment, with disastrous consequences for many.

The prose of this story is just lovely. The descriptions of time and place, the beauty of the love between the characters in various incarnations is exquisite. Shawn’s pain and Raleigh’s desperation are so well balanced. The secondary characters also contribute to the loneliness and beauty and sadness in this story. I honestly felt like this story was longer than one-hundred-forty-three pages, not because it dragged at all but because it felt like so much happened and so much of this love story played out over so many incarnations. Crossing from contemporary to historical and back again, this is very well done and recommended.

You can buy The First Hello here: 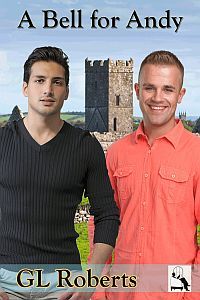 Title: A Bell for Andy

Blurb: Brian Gallagher and Andy McGrath grew up in the south end of Boston in the 1950s. They went to the same catholic school, had the same interest in Ireland, had both been hospitalized for Scarlet Fever–they even shared a room–and grew up having the same dreams that took place during a time they did not live and involved people they did not know. END_OF_DOCUMENT_TOKEN_TO_BE_REPLACED