“So much of history is mystery. We don’t know what is lost forever, what will surface again.” ― Amy Tan

Blurb: When Nick O’Flaherty arrives at the scene of a double homicide to find he has a witness to the crime, he thinks it’s his lucky day. But when he realizes his witness is suffering from amnesia and can’t even remember his own name, Nick wishes he’d gone with his gut and put in for vacation time.
END_OF_DOCUMENT_TOKEN_TO_BE_REPLACED

Hey everyone!!! Thanks to The Novel Approach for having me back here for my Dirty Deeds blog tour :) Dirty Deeds is the first in this spin-off series of Hell or High Water. Dirty Deeds focuses on Cillian and Mal, two characters who’ve been in both Hell or High Water books 1 & 2 (Catch a Ghost and Long Time Gone.) Dirty Deeds # 1 captures a very specific moment in time for Cillian (the spook) and Mal (the former SEAL in exile).

Today, I’ve pulled out three of my most frequently asked questions about Dirty Deeds, book 1.

Some of your books are listed as having ambiguous endings. Why is that / what does it mean/ does that mean it’s not romance?

I write romance. I believe in and want HEAs.* That being said, for the series that follow the same characters throughout all the books (Hell or High Water and Dirty Deeds) the characters aren’t ready to even have an HFN* after their first books. But by the series wrap up, there will be HEAs for everyone!

Technically, it’s actually both, since it falls under the EE, Ltd category, along with Free Falling & the Hell or High Water series (and Bound For Keeps). I’ll explain: Dirty Deeds #1 is a novella (about 22K). It was supposed to be a Prophet / Tommy short way back when I contracted Prophet’s series, but then my editor was like, ‘what about Mal and Cillian?” So basically, the first DD is a short that runs along the timeline for Hell or High Water # 3. It takes place over 4 days. And then, Dirty Lies and Dirty Love will come out POST Hell or High Water, and they will have their own (non-Prophet) plot. I hope that makes sense? Dirty Deeds # 1 is standalone, but I think if you’ve read Catch A Ghost and Long Time Gone, you’ll get a deeper understanding of the guys. But all my books are connected – my books all take place in one large, overreaching universe.

The ending of Dirty Deeds # 1 almost killed me. How long will we have to wait until Cillian and Mal get some resolution?

Well, you know they’ll get their ultimate HEA at the end of Dirty Love. That being said, you will see Mal and Cillian together a bit in the next two Hell or High Water books, Daylight Again and If I Ever. I’m not ‘that’ cruel. 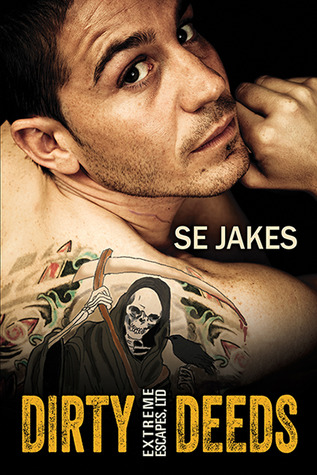 Two seasoned operatives finally meet their match: each other.

Cillian works for the mysterious Special Branch 20: an organization that runs black ops commissioned by the British government. His specialty is deep undercover assignments with virtually no support. He’s been alone for so long that he no longer knows anything else.

Mal’s also used to being alone. Wanted in several states and even more countries, he’s not allowed in the vicinity of any of his former Navy SEAL teammates. And his current assignment is to track Cillian in order to discover the spook’s endgame. Except he’s no longer sure which one of them is getting played.

Cillian isn’t about to let the mission that’s consumed him for the past several years crumble because an outsider is poking around where he doesn’t belong. But Mal forces his way through Cillian’s defenses—and into his heart—exposing a devastating betrayal that could destroy them both.

SE Jakes writes m/m romance. She believes in happy endings and fighting for what you want in both fiction and real life.

She lives in New York with her family, and most days, she can be found happily writing (in bed). No really…