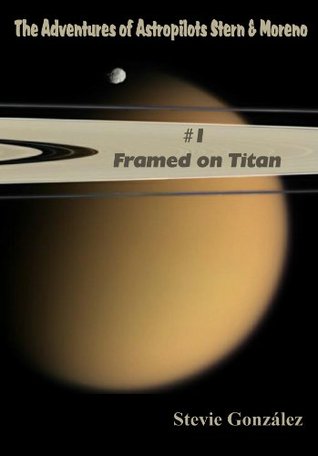 Stevie González is a forty-something guy in Spain. He lives with the greatest man in the galaxy, who is his better half and all-round inspiration. Among other things they enjoy: travelling, stargazing, reading, history, cooking & eating, and watching new and old TV sitcoms on DVD: particular favourites include, The Big Bang Theory, The Vicar of Dibley, Aquí no hay quien viva, The Royle Family, The Golden Girls and Will & Grace. They also love views from high-up, such as those that come after staggering breathless up the Giralda or Masada: hence the big dream is one day perhaps to be able to go together on a suborbital spaceflight (and come back afterwards in one piece too). You can find him on Twitter, his Blog, or drop him an Email.

The Adventures of Astropilots Stern & Moreno is a new series of novellas telling the story of the pilot (Zy Stern) and co-pilot (Bon Moreno) of a freight transporter in the mid-23rd Century.

Blurb: Framed on Titan – In the mid-23rd Century Zy Stern and Bon Moreno work as astropilots, transporting freight shipments between the various bases and colonies of the Outer Planet Region. On a routine assignment to Titan, they find themselves at the centre of a perfidious plot by a high-ranking Titanic official to gain control of interplanetary security for his own corrupt purposes. Somehow they must prove their innocence, and in doing so it will be necessary to succumb to the wanton lust that lurks in the dark corridors of Titan Base.

Blurb: Sweet Lemon – Almost stranded in space due to a fuel shortage, Zy and Bon are forced to dock onto the famous astroliner Sweet Lemon in order to refuel. Everything is running smoothly until Zy is inadvertently informed of the recent mysterious death of a passenger on the old spacecraft. Soon the astropilots become involved in the investigation and a race against time to identify the murderer in their midst.

The astroliner Sweet Lemon was made of strong stuff, and she was made to last.

Constructed and launched at the end of the 22nd Century, in times of high quality technical craftmanship, she quickly became antiquated in the next. By the time a few decades had passed, she had come to be viewed as an anachronism to the pragmatically driven 23rd Century, in which commercial numbers governed and the previously chic and expensive dreams of ambitious engineers, technical designers and architects were no longer valued.

Sweet Lemon differed from many of the contemporary models of spacecraft in that she prized comfort and style over speed and cost. Whereas a large array of smaller, streamlined vessels were now being built in the new century, Sweet Lemon was now a dear memory of older times, when people wished to travel in an atmosphere of exquisite design and stressfree pleasure; when highly positioned and well-paid citizens were happy to throw tens of thousands of astros to the solar wind to enjoy a two-week voyage from the Jovian system to the Saturnian system with all life’s little luxuries covered on the way. Nowadays what the population wanted and what drove the travel market were quick cheap flights in which travellers were couped up in small spaces and had to queue for hygiene cubicles.

Fortunately though, Sweet Lemon still had her special niche in the market. It might be small and often looked precarious, but she was still able to prove herself to be financially viable. As long as she continued to hold herself in the cutthroat business and the company that chartered her PanSpa, remained afloat, Sweet Lemon would continue to meander through the Solar System.

Bon turned over on the side of the bed, kicked off his already untied astroboots and wriggled his ass provocatively in the air, smirking. The captain regarded those small tight buns pushing against the material for a moment, his hands then reaching over and descending down to massage them, gripping tightly against the astrosuit and planting a single kiss there, his eyes going gooey. After a while, he grasped the top of Bon’s light astrosuit bottom and pulled it down over his knees and feet, chucking it to the side. Bon moved further onto the bed, making himself comfortable, and then splayed his legs and pushed his ass upwards, making the cheeks taut and giving the captain a tantalizing view of his love-hole.

The astroliner pilot hurriedly removed his clothes and then moved over to the bed, siddled up to Bon and between the back of his legs, opening his buttocks and rubbing softly inside the crack with the side of his thumbs before gently stroking his anus with a fingertip. With his large, deep-brown hands he smoothed round and round the cheeks, then rubbing and soft-fingering round the hole, at the same time enjoying watching the glory of the flesh on those twitching twin hills of ass.

The captain gave the cheeks a sudden slap and then forced them wide open, gazing inside at the rosette. Bon gave out a surprized “oh!” as he felt the blow, looking over his shoulder again at the captain, whose eyes were completely fixed on his ass. Another slap, and Bon cried “oow, sí,” which faded into a gentle purring “mmm”. There was one more light smack and then the captain dived like a gannet, sinking his tongue straight into Bon’s ass-hole and furiously shaking his head as he worked his tongue all around. By now Bon was moaning constantly, not just with the joy of the rimming, but also with the knowledge of what would be soon to come.

Blurb: Five Golden Rings: A Tale of Christmas Gaity – Hoping to make a little extra cash on the side, Zy accepts an unofficial assignment from an old business contact of his. The instructions that he receives seem straightforward enough at the beginning, but soon one problem after another arise en route. Can the spirit of Christmas bring about a happy resolution to the pilots’ misfortunes?

After a relatively short, four-hour flight, Zy and Bon and their menagerie finally reached Himalia, a dull oblate-spheroid rock that resembled more a giant, smooth meteor rather than an actual moon. Compared to other more well-established and extensive bases in the Solar System, such as on Callisto or Titan, Himalia Hub was a very small and purely functional station. In fact, as its name suggested, it was little more than a quick and easy springing board for vessels heading out from Jupiter’s moons towards the Saturnian system. Himalia Hub had few entry or exit restrictions and a tiny residential community that was almost purely devoted to the basic economic activity of serving the passing visitors. Apart from the basic infrastructure, Himalia Hub also housed a research station, a small military defense base separated from the central community, and a refuelling station for smaller spacecraft.

The big attraction that Himalia did however have to offer human travellers, was a first-class casino complex, one of the most popular in the Solar System. Thanks to its strategic location and lack of substantial real economy or family units, the governing body of Himalia had decided to exploit its financial and geographic position and had thus created a tax-free zone for gambling. All money won in the small and discreet casino zone could be taken from the moon in its complete form, ‘no questions asked’ as the vernacular goes, without a single astro being deducted by any bureaucratic or taxation excuse. In this way, it had more than doubled the size of its installations in the first decade of its existence and managed to attract a small but steady flow of visitors who now came for that sole purpose.

Nonetheless, the attraction of its gambling facilities often proved irresistible to those transitory pilots and other astroworkers, who had intended to stop off for a few hours between flights and ended up being drawn down into the glitzy world of infinite financial possibilities. It was a fever that often befell a passer-by who, deluded by moderate pay and long working hours hours, decided to try his or her luck for the sheer hell of it.