I’ve been fascinated with reincarnation for many years. As a child in the early 1970s, I recall seeing a TV commercial urging viewing to be “born again.” I clapped and cheered so much, my older brother challenged me to explain what “born again” meant. Ours wasn’t a churchgoing family and he was confident that I, just five years old, had no clue.

I said, “That’s what happened to me. I got old and I died and was born again.”

In my pre-author career working in ophthalmology, including pediatric ophthalmology, I learned that if you ask a young child a question firmly enough, you’ll get an answer. Any answer. So perhaps as a little girl I just confabulated any response to satisfy a sibling. But even as a teen and young adult, I had dreams that took me back to lives I can scarcely imagine in waking life. Once I was a Japanese swordsman who’d disgraced himself. Another time, a backwoodsman in post-Revolutionary Virginia, thieving off his fellow settlers. If past lives are real, I desperately hope I’ve led a few positive, altruistic ones. But I’ve yet to dream about them!

When I started writing SOULLESS, I envisioned a meeting between two very different men—Nicholas, a crippled, embittered lord of the manor, drunk every night and sunk in despair, and Ban, a vain, strutting, life-loving vampire who initially feels not a whit of guilt for his murderous ways. Sometimes I plot a backstory that I, the author, remain aware of, yet never make public, so to speak, in the finished novel. As I wrote the scene, I understood these men had known one another in a past life—loved and lost each other in some prior existence. And gradually I realized that Nicholas had a great deal of unfinished business, not only with Ban, but with Ban’s master, the cruel and deformed Sebastian. I enjoyed weaving together flashbacks from the fifteenth century with the main narrative, which takes place in 1798. It’s tremendously comforting to imagine some higher power, some Wheel of Fate, is looking out for us, making certain that even if we fail, we’ll be given a new life in which to set things right.

Some folks think reincarnation is a relatively new idea, a product of the 1960s counterculture, but it isn’t. Here’s a quick, highly incomplete snapshot about reincarnation over the ages:

• A Hindu holy book mentions reincarnation as early as 700 B.C.E.: “…as the dweller in the body experiences childhood, youth, old age, so passes he on, to another body.” – The Bhaģavad-Gita
• Pythagoras and Plato both taught that human beings would live several lives, in several different bodies, until they attained spiritual purity.
• In the Bible, John the Baptist is asked more than once if he is the prophet Elijah reborn. This goes along with the Hebrew term gilgul neshamot, which means the transition of a soul into another form.
• Reincarnation occurs in Norse mythology, specifically the Poetic Edda.
• A quote from groundbreaking psychiatrist Carl Jung: “I could well imagine that I might have lived in former centuries and there encountered questions I was not yet able to answer; that I had been born again because I had not fulfilled the task given to me.”

No matter your personal opinion about the possibility of reincarnation in the real world, I hope you’ll enjoy how I handled the notion in SOULLESS. The love between Nicholas and Ban is predestined, and I took great pleasure in helping them overcome so many obstacles—fear, pain, heartbreak, and even death. 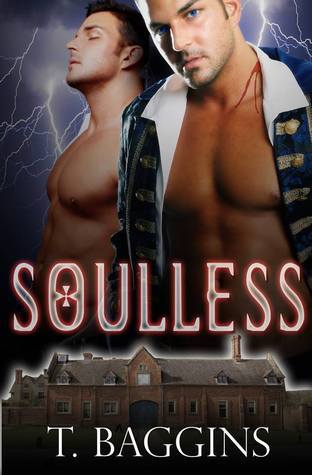 A Man of Science

Nicholas Robinson is a chemist decades ahead of his time. Crippled by a riding accident and embittered by his injuries, he shuns the world, focusing on his laboratory and experiments. But when the sale of his country estate, Grantley, leads to an encounter with a vampire, Nicholas realizes there is more in heaven and earth than he ever dreamed possible.

A Creature of Darkness

Although three hundred years old, Bancroft Ulwin is young by supernatural standards. Enslaved by his cruel, deformed maker, Ban is forbidden from relations with mortal men unless it ends in death. But his liaison with Nicholas, expressly against his master’s wishes, soon expands beyond mere lust to something more.

Long ago while still mortal, Ban met Serafino, the only true love of his life. When death separated them, Ban accepted his role as an enemy of human kind. But as he comes to suspect Nicholas is Serafino reincarnated, Ban begins to question everything he once believed. Including his own damnation.

“Sir! A doctor is needed,” Ban called, rapping on the door and fighting the impulse to break it down.

“Yes, yes,” Dr. Flowers rumbled, fiddling with the latch. “What is—”

Ban waited, wondering how pale and terrible he looked in the lamplight, cravat and shirt missing, blood-spattered coat buttoned up to his chin.

“What manner of emergency is this?” Dr. Flowers mumbled. His hand went to some trinket or amulet at his throat.

“The very worst kind. Mr. Nicholas Robinson lies on brink of death. A physician is required, and with all haste, sir.”

Dr. Flowers stared at Ban. “I am grieved to hear that. Yet I cannot invite you inside. Let me say it again, I do not permit you—”

“Doctor.” Ban stepped over the threshold. “I know not what fairy tales or grimoires to which you cling. But whether you are wise in truth or wise merely by repute, this man needs your attention. Please, follow me back to Grantley and give him benefit of your healing arts.”

Dr. Flowers swallowed. He was every minute of sixty, Ban realized, if not a bit older. Stoop-shouldered, suffering from ague, vision dimmed with time and use. Ban was willing to bet Dr. Flowers had never seen a vârkolak before, except perhaps in a book.

Suddenly the old man thrust out his amulet, a charm against the evil eye Ban recognized as taken from the Greek Isles. “Flee before this! I command you to flee!”

The amulet’s leather strap snapped easily between Ban’s fingers. He contemplated the item for a moment, and then smiled. “The nazar is useless against me, sir. It’s meant as a defense against envious old women, a symbol of mankind’s fear of wise females, in my view, though no one ever asked me. What more can you offer?”

Dr. Flowers stumbled backward to his desk, procuring a crucifix from the top drawer and holding it up. “Fly before the one true God! Turn your face away.”

Ban moved forward slowly, contemplating the crucifix. “That symbol never made sense to me in life. Priests told me I was supposed to thank Him for his suffering. But why did God the Father, who was also Christ Jesu, require Himself to suffer? I felt like the story was incomplete, the true meaning obscured.

“It took time for me to see, the idea is hope in disgrace and perseverance in pain. No matter what is done to us, no matter what evil we endure, the resurrection will come. The torture will be answered with triumph.”

“He maketh me lie down in green pastures,” Ban said.

“He leadeth me beside still waters….”

“He restoreth my soul.”

“He leadeth me in the paths of righteousness for his name’s sake….” Dr. Flowers’s voice hitched up, eyes wide.

“Yea, though I walk through the valley of the shadow of death, I will fear no evil, for thou art with me; thy rod and thy staff, they comfort me,” Ban said. “Thou preparest a table before me in the presence of mine enemies, thou anointest my head with oil, my cup runneth over. Surely goodness and mercy shall follow me all the days of my life, and I will dwell in the house of the Lord forever,” Ban concluded, laughing at Dr. Flowers’s horror.

“Have you not heard it said that even the Devil will recite Holy Scripture for his own ends?”

Orphaned at birth, T. Baggins was raised by wolves until age fourteen, when the pack moved on one night without a forwarding address. Returning to human society, Ms. Baggins taught herself to read and write by studying fan fiction. Cutting her teeth on Kirk/Spock (Star Trek: The Original Series, baby!) she soon began slashing rock stars and X-Men. Despite a lifetime spent in the southern U.S., T. Baggins considers herself a citizen of the cosmos and a freethinker, which is good, because no one has offered so much as a penny for her thoughts. In her spare time she enjoys blogging at Shades of Gay, emptying gin bottles and tweeting into the void as @therealtbaggins.

“One love, one heart, one destiny.” ― Bob Marley

BLURB: Nicholas Robinson is a chemist decades ahead of his time. Crippled by a riding accident and embittered by his injuries, he shuns the world, focusing on his laboratory and experiments. But when the sale of his country estate, Grantley, leads to an encounter with a vampire, Nicholas realizes there is more in heaven and earth than he ever dreamed possible.

A Creature of Darkness

Although three hundred years old, Bancroft Ulwin is young by supernatural standards. Enslaved by his cruel, deformed maker, Ban is forbidden from relations with mortal men unless it ends in death. But his liaison with Nicholas, expressly against his master’s wishes, soon expands beyond mere lust to something more.

Long ago while still mortal, Ban met Serafino, the only true love of his life. When death separated them, Ban accepted his role as an enemy of human kind. But as he comes to suspect Nicholas is Serafino reincarnated, Ban begins to question everything he once believed. Including his own damnation.