At a Glance: What I really enjoyed about Scrap was the characters and the plot both had depth to them.

Blurb: When things come to a head, there’s nowhere to go but down…

On the surface, Derek “Call Me Dare” Nelson’s life is simple, doing up custom camper vans while living in a slightly illegal caravan in his riverfront yard. When a handsome, smooth-talking developer offers to buy the land out from under his feet, Dare realizes it’s the same man he had to escort home from a party months ago for causing a drunken scene.

Grant Matravers lives a double life, attempting to adjust to weekends as a single, divorced gay man while staying closeted at work. The strain of keeping up the part-time pretense, missing his kids, and now a problematic attraction to the shave-headed, tattooed Dare, has worn his emotional barriers dangerously thin.

Dare blasts through those barriers in a way Grant isn’t prepared for, challenging everything he thought he knew about himself as a gay man. But as their chemistry heats up and the intimacy between them grows, Grant edges toward a decision that could blow up in his face. Exposing a hornet’s nest of complications that could destroy any chance for happily ever after.

Review: Though Scrap is the third book in Josephine Myles’ Bristol Collection, it’s possible it could be read as a standalone, but my experience has taught me well—if there are previous books in a series, it’s best to read them in order to avoid any confusion. I’m so glad I did read the first two novels, Junk and Stuff, before Scrap because they set the pace, and having only just become familiar with Josephine Myles’ work, I then knew what to expect.

Both Grant and Dare have misguided ideas about the other because they’ve both stereotyped each other. Grant comes off as a bit of a cheating stuffed-shirt when we first meet him in the previous stories, and Dare is a bit of a braggart, so when these two finally come together in Scrap, the layers start to peel away and expose them for who they really are.

Grant is having a tough time when it comes to being honest and coming out of the closet. Deep down, he is an honest man who cares about those he knows he’s hurting. The same goes with Dare, who comes off as a bit of a toughy, with the bald head, tattoos, and gauges, but he has a soft spot for those he loves, especially his troubled brother.

Scrap can’t really be tagged with a friends with benefits label, because these two men don’t start off as friends. It’s more like they’re two blokes getting off on each other until something better comes along…that is, before they started to get to know each other. And what eventually happens towards the end is rather sweet.

What I really enjoyed about Scrap was the characters and the plot both had depth to them. It’s not a light, fluffy read. All in all, I’ve found myself a new author I would gladly read more from, and Scrap won’t end up on the scrap heap. It’s ended up on my permanent faves list as a re-read.

You can buy Scrap here:

Hi. My name’s Jo, and I’m addicted to window shopping in vintage clothes shops. And I really do mean window shopping as I rarely ever buy anything, but still they lure me in every time. It makes it difficult getting down into town when I have to walk past at least five different vintage boutiques!
END_OF_DOCUMENT_TOKEN_TO_BE_REPLACED

“In art as in love, instinct is enough. ” ― Anatole France 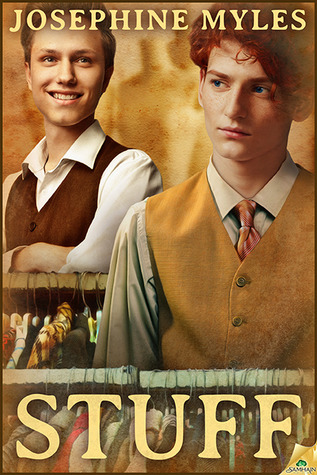 Blurb: Tobias “Mas” Maslin doesn’t need much. A place of his own, weekends of clubbing, a rich boyfriend for love and support. Too bad his latest sugar daddy candidate turns out to be married with kids. Mas wants to be special, not someone’s dirty little secret.
END_OF_DOCUMENT_TOKEN_TO_BE_REPLACED

There is not a single one among us avid readers who won’t relate in even the tiniest way to Jasper Richardson. At least I hope it’s in the tiniest way; otherwise, you might have a problem. What we would call an addiction to fiction or a healthy obsession, Lewis and Carroll Miller would call a psychological affliction in Jasper, and it’s his affliction that’s at the crux of “Junk”.

Jasper’s a hoarder, you see, but he’s not just any old hoarder. No, Jasper hoards the written word: books, magazines, newspapers. You name it and Jasper has got it in piles from floor to ceiling throughout nearly his entire house. And as a university librarian, he’s got plenty of access to discarded items that he’s more than willing to give a good home, which he feels compelled to do because he can’t bear the thought of them falling into the wrong hands at best or be relegated to a recycling facility at worst. But that’s a mask, a result of something far more painful from Jasper’s past that’s manifesting itself through his hoarding.

Lewis and Carroll are the brother and sister team that Jasper contacts once his despair over the condition of his life hits critical mass, from the depression of living in a home with rooms he can no longer use because the doors are blocked closed by toppled piles of books, to the depression of having a home but no one there to share it with, which throws the emptiness of his life into sharp contrast with the fullness of the walls he lives behind. It took a lot of nerve for Jasper to finally make that first phone call. It took an act of incredible courage to agree to the therapy he’ll need to get to the heart of his hoarding addiction and to confess what lies behind it.

Admitting he has a problem is the first step, and that turns out to be the easiest step in the process of recovery for Jasper, especially when his feelings for Lewis become less than platonic and cause Lewis to pull away in the interest of his professional integrity. But it’s exactly those feelings for Lewis that become Jasper’s compulsion to change, to get his life in order so he can prove his feelings have nothing to do with his recovery and everything to do with the fact he’s fallen in love with a man whose kindness can fill his life better than any book ever could.

Who’d have ever thought that a book about a man who lives in a house with mildewed walls and windows, and stacks of outdated newspapers and magazines and books he’ll never, ever read could turn out to be a story that would totally win my heart? Josephine Myles made it happen almost instantly, in my affection for Jasper and my empathy for the love of his paper and ink stash. Were it not for e-readers, I imagine there are many of us whose homes would be overrun with the books we devour. It’s an obsession we all understand, and it made Jasper so relatable.

Though it wasn’t easy, Lewis helps Jasper recover control of his life, but Jasper also helps Lewis find a happiness that has always eluded him. These two men were made for each other, like a closed book just waiting for the right someone to come along and open it up to see and love all the secrets it holds inside.

This is another Josephine Myles novel I wouldn’t hesitate for a second to recommend. This new cast of characters is just that, complete characters whose quirks and idiosyncrasies made this book both fun and heartwarming to read. Plus, there are a couple of characters who show up that you may just recognize from the short story “When In Amsterdam…” from the anthology Winter Warmers. I loved that crossover a lot.

You can buy Junk (The Bristol Collection, Book 1) here: