What is Romance? A Guest Blog By Rick R. Reed

So one of the comments I’ve been seeing since the release of my new book, Raining Men is “this is NOT a romance.” Ironically, almost all of these reviews have been raves, so it’s NOT a complaint at all. But I cringe when I see it.

This bugs me for a few reasons:

1. Such a comment has the potential to turn romance readers away. And what romance author wants to do that? Romance readers are my main target market. Besides, see below for why I think saying such a thing isn’t correct.
2. Such a comment is magnanimous, setting the speaker up as the authority on what constitutes romance. I just spent about an hour researching the term on line and I couldn’t find a list of specific rules that a book must follow in order to qualify as a romance. The only common denominator I could find in all the information I sorted through boiled down to two words: love story.
3. Raining Men was written with the intention that it is a contemporary romance and I believe, with all my heart, that it is.

But is it a romance? Oh yes.

And I’ll tell you why and what, to me, constitutes a romance and how my books fits in that category. First and foremost, Raining Men is a love story. It is about two men, both damaged, both in varying stages of the process of coming to terms with who they are, falling in love and finding their happily-ever-after with that one special person. I think it’s this business of “coming to terms with who they are” is what may have prompted some people to comment that this is not a romance. They say that it is, instead, about a journey of self-realization.

The book is, indeed, that. We’ve all heard the old adage, “you can’t love someone else until you learn to love yourself” and that’s really what Raining Men is all about. My main character is a wounded and often vain and despicable man, who did not understand nor value himself. His journey in the book is all about discovering who he is and loving what good there is within him.

But the purpose of taking that journey was to find love, one special love that went beyond all the endless hooking up my main character did before he took this journey to discover the good person hiding beneath his porn-star handsome exterior.

And how could a journey whose ultimate destination is about finding one’s own true love not be a romance? Beats me.

You can say Raining Men may not be your cup of tea. That’s fine; that’s your personal opinion. But please don’t say it’s not a romance because it really, really is. Really.

I think broad labels are fine. They help us find things; they help us determine where things fit. But I think it’s also a good idea for each person to keep an open mind about what constitutes a particular genre and what doesn’t.

In the end, you may find that if you keep that open mind, you may open yourself up to some pretty wonderful stuff that you may not have even realized you would like.

The same goes for food. At least that’s what Mom and Dad always told me and they were right.

So, if someone tells you my new book Raining Men is not a romance, you tell them: “I’ll be the judge of that.”

It’s been raining men for most of Bobby Nelson’s adult life. Normally, he wouldn’t have it any other way, but lately something’s missing. Now, he wants the deluge to slow to a single special drop. But is it even possible for Bobby to find “the one” after endless years of hooking up?

When Bobby’s father passes away, Bobby finally examines his rocky relationship with the man and how it might have contributed to his inability to find the love he yearns for. Guided by a sexy therapist, a Sex Addicts Anonymous group, a well-endowed Chihuahua named Johnny Wadd, and Bobby’s own cache of memories, Bobby takes a spiritual, sexual, and emotional journey to discover that life’s most satisfactory love connections lie in quality, not quantity. And when he’s ready to love not only himself but someone else, sex and love fit, at last, into one perfect package.

THUNDER rumbles. Rain hisses. Flashes of lightning—brilliant and blue white—rip across the sky.
I know I’m dreaming, yet something about this whole scenario seems as real as the nose on my face, the hair on my head, the dick swinging between my legs.

In addition to the natural sounds of the storm, there’s another noise, and it makes me smile. Music. Rising. Percussion. Disco beats. And the powerful wail of Martha Wash and the Weather Girls singing “It’s Raining Men.”

I’m standing under some kind of awning—red, canvas—watching the rain pour down not in drops, but sheets. Blinding. The flashes of lightning are like a disco strobe light, revealing in flashes of blue and silver, a darkened cityscape. Night. But a netherworld cityscape, blue gray, unreal.

It’s the music that makes me want to move out from under the awning. The music that has me smiling, my hips, head, and arms in synchronized rhythm with the beat.

Even the rain, a cold shock to my naked body, isn’t enough to keep me from driving myself out into the downpour to dance to the song, which has long been a favorite of mine.

What a delicious notion—raining men! Men falling from the skies! More men than one can shake a stick at (or something that rhymes with stick, heh-heh).

I look up into the midnight-blue clouds, my mouth and eyes open to the water pouring down, and I see it: the first of the men.

I stare in wonder as he drops from the sky. A blond Adonis, smooth and muscled, allover tanned with a dick thick, long, and perfectly hard, pointing back up at the sky. He lands somewhere outside my vision, and I dance, spinning toward where I saw him fall, hoping to find him where he has landed so I can say hello, reach out and touch him.

But before I can make any progress, another man falls from the sky. This one is hirsute, bearded, husky but hard-muscled, putting me in mind of the actor Jeffrey Dean Morgan. He smiles. Before I can even smile back, other men tumble from the skies, and I want to laugh, cry out in jubilation at my good fortune.

It truly is raining men!

I raise my arms and shout, “Come to Papa!”

The first body hits me hard, feeling more like a ton of concrete instead of the delicious marriage of sinew, skin, and bone that I have come to know and love as the male form. I collapse to the ground, wind knocked out of me, and look up at the man who has rained down on me. He seems to have no awareness that I am beneath him, and I scurry to get out from underneath the crushing weight threatening to suffocate me, pressing my bones into the wet concrete beneath my back.

I manage to get out just as another man drops from the sky, a hot African American, bald, and looking just like Taye Diggs. I scramble free of his path, but he lands on my leg anyway as I crawl through the rain-slicked street.

I hear my leg break with a sickening crack. It takes only seconds for the pain to radiate throughout my entire body.

I roll over, gasping, wincing, groaning, and look up to see an entire sea of naked men falling from the sky in ever-increasing velocity—all headed straight for me.

The music reaches a crescendo in time with my shrieks.

The sheets beneath him were twisted and damp with sweat. He gasped, trying to regulate his heartbeat, which was jackhammering so hard he expected to look down and see it lifting the skin off his chest. A cartoon heart.

The room was silent.

Where did the music go? Martha? Weather Girls?

Where was the rain? The thunder?

He breathed in deeply and exhaled slowly.

Just a dream. A nightmare.

Where are all the men?

Finally, he grinned, turning over in his bed.

Why, there’s one! Lying right next to me, looking at me with a concerned face, a handsome face. Even in a darkened bedroom, Bobby could still tell if they’re hot or not. It was his specialty.

This one, with a mop of curly blond hair and pecs like Michael Phelps, was a ten.

His voice was husky, sleep-choked. “Dude. You were having a nightmare. You okay?”

He placed what was meant to be, Bobby was sure, a comforting hand on Bobby’s chest. Bobby cringed a little, moving away.

This has never happened before.

I have no idea who he is.

Before Bobby could stop the words from tumbling out of his mouth, they came. “Who the fuck are you?” 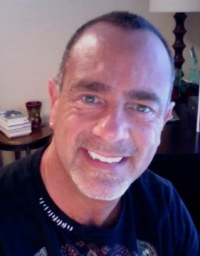 Rick R. Reed is all about exploring the romantic entanglements of gay men in contemporary, realistic settings. While his stories often contain elements of suspense, mystery and the paranormal, his focus ultimately returns to the power of love. He is the author of dozens of published novels, novellas, and short stories. He is a three-time EPIC eBook Award winner (for Caregiver, Orientation and The Blue Moon Cafe). Lambda Literary Review has called him, “a writer that doesn’t disappoint.” Rick lives in Seattle with his husband and a very spoiled Boston terrier. He is forever “at work on another novel.”

Visit Rick’s website at http://www.rickrreed.com or follow his blog at http://rickrreedreality.blogspot.com/. You can also like Rick on Facebook at http://www.facebook.com/rickrreedbooks or on Twitter at http://www.twitter.com/rickrreed. Rick always enjoys hearing from readers and answers all e-mails personally. Send him a message at jimmyfels@gmail.com